Despite reaching the dog days of summer, U.S.-based buyout and mezzanine fundraising continues to soar. Since the last issue of Buyouts, fundraising added another $10 billion to its year-to-date total, which is now at $226 billion—$100 billion more than at this point in 2018. ArcLight Capital Partners led the charge. The Boston-based firm raised $3.5 billion for its seventh energy fund through two vehicles. ArcLight focuses on midstream energy infrastructure assets.

Aurora Capital also crossed the billion-dollar mark, raising $1.3 billion for its sixth fund, which targets $1.5 billion. Park Hill Group is placement agent on the fund. The firm’s previous flagship closed on $1.2 billion in 2017.

Ares Management was close behind, raising $990 million for its energy opportunities fund, which will target special situations. Welsh, Carson, Anderson & Stowe added another $800 million to its 13th fund, which closed at $4.3 billion. The fund’s original target was $3.5 billion. Its previous flagship closed at $3.3 billion in 2016.

Dealmaking continues at its slow pace. It added $6.8 billion to its year-to-date total, which now stands at $112 billion. Only one deal surpassed $1 billion. That deal belonged to Advent International. The firm acquired the German-based manufacturer of chemical products company Evonik Industries for $3.4 billion. 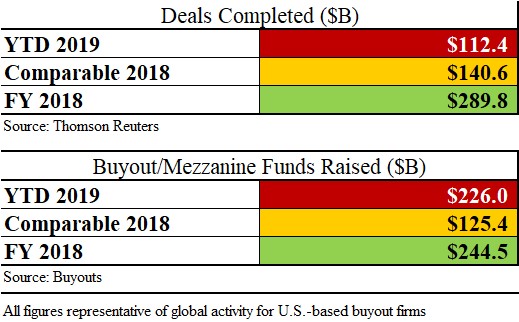