U.S.-based buyout and mezzanine fundraising wasted no time in shaking off the summer rust. Since the last issue of Buyouts, fundraising added $10.8 billion to its year-to-date total, which is now at $238.6 billion— more than $100 million more than this time last year.

Vista Equity led the charge, adding another $4.6 billion to its seventh tech buyout fund, which has closed at $16 billion. Vista closed its predecessor fund at $10.6 billion in 2017.

Lindsay Goldberg was second in fundraising, raking in more than $2.8 billion for its fifth flagship. Its fourth fund closed at $3.6 billion in 2015, down from its third fund, which closed $4.7 billion in 2009.

Ford Financial Fund also hit the billion-dollar threshold with its third fund, which raised more than $1 billion. The fund is co-managed by Gerald J. Ford and Carl B. Webb and focuses on investments in community banks.

Freeman Spogli helped add to the frenzy. It added $742 million to its eighth fund, which closed at its hard cap of $1.85 million. Lazard was the lead placement agent, while Ropes & Gray LLP provided legal counsel.

Dealmaking also picked up from its summer sluggishness, but continues to underwhelm this year. Since the last issue of Buyouts it added $5 billion to its year-to-date total, which now stands at just $118.8 billion.

The largest deal belonged to Mechanics Bank, a unit of Ford Financial Fund, which acquired Rabobank NA, a unit of Cooperative Rabobank UA, for $2.1 billion. Rabobank NA is a provider of commercial banking services. 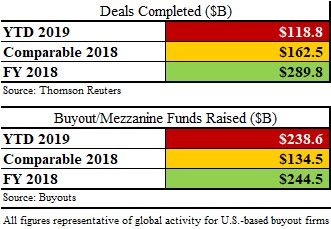 Firms & Funds 14 hours ago
Added to your Saved Articles
Loading
Unsave Article
Please confirm you would like to remove this article from your saved articles.
Share with other subscribers
Only logged in subscribers of this site will be able to access the shared article.