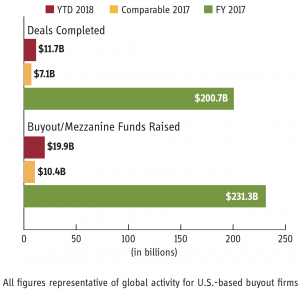 U.S.-based buyout and mezzanine fundraising continued to climb in January. Since Buyouts last went to press, domestic firms added $5.4 billion in commitments, to bring 2018’s total to $19.9 billion — leading this time a year earlier by $9.5 billion.

Silversmith Capital Partners wrapped up its second flagship in about three months at its hard cap of $670 million. Brynwood Partners, a Connecticut firm focused on consumer products, finalized its eighth fund at $649 million.

Dealmaking had a big two-week stretch, closing on $9.7 billion in private equity-backed deals. The yearly aggregate now sits at $11.7 billion, ahead of 2017’s total by $4.6 billion.

The list was led by an energy deal backed by an investor group. Equis Energy Developments Pte Ltd was acquired by Global Infrastructure Partners, CIC Capital Corp and Public Sector Pension Investment Board for $5 billion.

TPG Capital bought out the entire share capital of WaveDivision Holdings, an internet-service provider, for about $2.4 billion.

Milost Global completed the third deal of the past two weeks that jumped the billion-dollar hurdle: Primewaterview Holdings, a Lagos, Nigeria, provider of land subdivision services, for $1.1 billion. 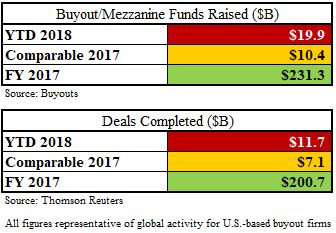