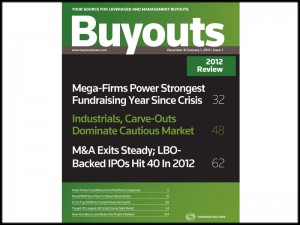 The $154.2 billion raised overall by U.S. buyout and mezzanine funds through Dec. 14 also shows that the level of fundraising has rebounded sharply from its financial crisis swan dive.

The tally marks a 56 percent rise over 2011 when $98.7 billion was collected, and more than doubles the $69.3 billion raised in 2010. The year’s gains were powered by a four-fold increase in money-gathering by funds targeting $5 billion or more. These mega-funds raised $53.8 billion in 2012, by far the category’s strongest showing since 2008. Figures from Buyouts include money raised from both interim and final fund closings.

“The reason for this year’s growth in fundraising was the quality of funds that came back to market,” said David Fann, chief executive of TorreyCove Capital Partners, an advisor to limited partners. “While PE remains the best-performing asset class,” he said, “nobody’s euphoric…investors have nowhere else to go.”

The rebound in fundraising has a number of causes and implications for both investors and firms. Investors have been gradually increasing their allocations to the asset class, driven in part by the low-return expectations of more liquid assets. There also have been greater distributions from the asset class, much of which gets reinvested. And many investors have been pledging more money to private equity because so many big, brand name funds have come to market this year.

“With the financial crisis behind us… many folks are looking to boost their alternative position for a recovery that everyone expects will happen,” said Jeff States, the state investment officer at the Nebraska Investment Council. A recent study from Coller Capital, a private equity secondary specialist, bears this out. While most investors expect to keep their private equity allocations steady over the next two years, more than three times as many investors expect to increase their private equity allocations (30 percent) as decrease them (9 percent).

New money is also coming into the asset class, especially from wealthy individuals. David Rubenstein, the co-founder of The Carlyle Group, said at a recent conference that individual investors are “where I see the biggest increase in private equity investments…right now.”

“The feeling among GPs is that there are too many funds and not enough capital to go around,” said Aaron Rudberg, a partner at Baird Private Equity, a lower mid-market private equity firm. “All the LPs we talk with are being inundated by general partners.”

Globally, there were 1,982 funds “in the market” at the close of 2012, compared to 1836 funds seeking capital at this point last year, according to Preqin Ltd, the alternative asset data provider. Those funds, including buyout and venture capital, are collectively seeking to raise $803 billion, up 10 percent over the $728 billion that was collectively targeted last year, according to Preqin.

Public pension funds, the biggest investors overall in private equity, are increasingly looking to concentrate their portfolios and reduce the number of relationships they have to manage. A new study by Probitas Partners, a placement agency, bears this out. It reports that 53 percent of investors surveyed planned to reduce their number of GP relationships significantly in 2013.

Taken together, these circumstances intensify the industry’s competition for money, creating an ever growing chasm between the ‘haves’—firms that consistently produce top-quartile or top-decile returns—and ‘have nots.’ According to Preqin, only 46 percent of private equity funds were able to reach a final close within 12 months, while 14 percent of funds could only reach a final close after being in the market for at least two years.

“This fundraising environment is one where the best funds get raised and the second tier funds don’t,” said TorreyCove Capital’s Fann. “Two-thirds of firms aren’t going to have much fun, and they aren’t going to reach a first close anytime soon,” he said.

Most investors have come to realize that fund selection, more than anything else, is the key to success, said Kelly DePonte, a partner at Probitas. “If you’re a private equity investor and think you can make money by throwing money at a dart board, boy are you in for a world of hurt,” he said.

Inevitably, the contrast between firms with top-quartile returns and firms that don’t have them will lead to a shake-out, observers said. Some firms will be forced to settle for smaller vehicles and others won’t make it at all. “Probably 10 percent to 15 percent of firms will disappear,” said DePonte. “But it won’t be a wholesale slaughter. That’s because buyout guys can get away with having a smaller firm.”

The split between hot firms and those that are struggling has implications for terms and fees. While hot firms don’t typically have to compromise on terms and fees, most firms do. LPs have increasingly been in the driver’s seat, and have been able to exert an increasing influence over terms that extend beyond those that have become standard in the last few years, such as 100 percent fee offsets, European waterfalls, and discounted management fees. “In 80 percent of situations, the LP has the upper hand when it comes to terms,” said Fann.

Some funds, such as the debut vehicles from Alvarez & Marsal Capital Partners and Public Pension Capital Management, have also begun offering lower carried interest terms of just 10 percent (instead of the usual 20 percent), if LPs commit at least $100 million. These arrangements have been gaining traction. Already, the Oregon Investment Council and the Minnesota State Board of Investment have pledged $100 million each to Public Pension Capital while Oregon has also signed on with Alvarez & Marsal.

Yet worries about a big wave of separate-account deals, which would have further driven down fees, failed to materialize in 2012. Such deals, headlined in 2011 by the massive $6 billion in commitments from the Texas Teachers Retirement System to Kohlberg Kravis Roberts & Co. and Apollo Global Management, likely drove fees below the ‘2 and 20’ level common for co-mingled funds. In 2012, separate-account deals got smaller and more focused. In the two biggest, the California Public Employees’ Retirement System made a $500 million commitment to a Blackstone Group-run separate account for ’tactical opportunities’, while the New York City Bureau of Asset Management committed $850 million across two debt-related separate accounts run by Apollo Global Management and Golden Tree Asset Management.

Looking ahead to 2013, observers told Buyouts that they expected fundraising to be about the same or slightly higher. “My guess is that fundraising in 2013 will be 15 percent to 20 percent higher than 2012,” said DePonte of Probitas.

Baird Private Equity’s Rudberg also predicted that 2013 will be better for fundraising because “investors see better-quality funds coming out in 2013 than the ones currently in the market.”

Perhaps the most surprising theme of 2012 is that mega-funds, once a bad word among many LPs, raised so much money. The most obvious difference from the prior year was the increase in the number of U.S.-based mega-funds in the marketplace. In 2012, there were 14 such funds in the market, compared to eight in 2011, a 75 percent increase.

Mega-funds, which scooped up money from investors during the pre-crisis golden years, often paid top-dollar for deals such as Energy Future Holdings (previously known as TXU), which turned sour once the financial crisis kicked in, hurting the reputation of mega-funds in the eyes of many investors.

Even so, many mega-funds had a lot of things going for them in 2012, including strong brand names and, often, a sector focus. Mega-funds, in other words, could no longer be described exclusively as generalist buyout vehicles, with many now focusing on industry sectors or particular areas of the world.

Indeed, 2012 was marked by the largest fund closing by a private equity fund since the financial crisis: Advent Global Private Equity VII LP, which raised $10.8 billion dollars. That fund, which has a geographical focus, plans to buy companies in Europe and North America.

Fann of TorreyCove said a lot of firms were “sniffing around opportunities in Europe.” So far, however, “the shoe hasn’t fallen on distressed sellers. It’s like waiting for Godot,” he said, referring to the play by Samuel Beckett. “Godot might never show up.”

Other mega-funds with a geographic focus include the KKR Asian Fund II LP, which just hit its $6 billion hard cap, Cinven V Fund LP, with a $6.6 billion target, and Apax Europe VIII LP, which has a target of $11.8 billion. (The Cinven and Apax fund aren’t included in our fundraising totals because they are not headquartered in the United States.)

Having an industry focus—be it energy, infrastructure, technology or consumer-retail—seemed to resonate with investors in 2012. Energy and infrastructure funds were especially popular among buyout strategies (see accompanying tables). Indeed, mega-sized sector funds can fill two needs of big investors: one, they help investors diversify their portfolios in ways generalist funds can’t. And two, they are big enough so that giant investors like CalPERS or Washington State can invest hundreds of millions of dollars at a time without becoming dominant.

Mega-sized energy funds were also popular. These included the Riverstone Global Energy and Power Fund V LP, which recently increased its hard cap to $7.5 billion, and First Reserve Fund XIII LP, which has a $6 billion target. The Riverstone Holdings fund received pledges of $250 million from the Illinois Teachers’ Retirement System, $200 million from the Delaware Public Employees Retirement System and $100 million from the State of Wisconsin Investment Board. The First Reserve Corporation fund has so far received a $400 million commitment from the Washington State Investment Board.

These funds are being raised at a good time in the energy industry, since there is a growing demand for investment money to take advantage of the revolution in natural gas and crude oil production from innovations in hydraulic fracturing, or “fracking.”

Consumer retail specialist Leonard Green & Partners, backer of Neiman Marcus, J. Crew and Whole Foods, had a phenomenal 2012. Its latest fund, Green Equity Investors VI LP, closed in 2012 with $6.25 billion, exceeding the fund’s original $5 billion target. The fund drew commitments of $300 million from the New York City Bureau of Asset Management and the Washington State Investment Board, $200 million each from the Florida State Board of Administration, the Illinois Teachers’ Retirement System, the Minnesota State Board of Investment, and the New York State Common Retirement Fund, $150 million from the Oregon Investment Council and $100 million from the State of Wisconsin Investment Board.

But not everything is rosy in mega-land. The latest flagship vehicle from Kohlberg Kravis Roberts & Co., KKR North American XI Fund LP, has been struggling to raise the $8 billion to $10 billion that it initially targeted. That fund has been in the market for nearly two years now.

Another worry for mega-funds, according to Probitas’s investor survey, was that one-third of investors expressed concerns that these big, brand-name private equity firms were becoming “asset managers focused on AUM growth and are moving away from their key investment strengths.”

Apart from the dramatic fundraising growth by mega-funds, funds of a more moderate size, those targeting between $1 billion and $4.9 billion, were still the largest category as far as money raised. During 2012, such funds raised $66.4 billion, a 17 percent rise over the $56.7 billion raised by such funds in 2011. Funds seeking less than $1 billion also saw a minor boost in total money raised. Such funds finished the year having raised $29.2 billion, up a hair from the $25.8 billion raised by such funds in 2011. Even so, the small end of the market represented just 19 percent of the total amount of money raised by the private equity industry this year.