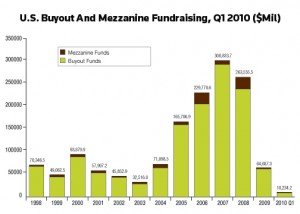 A meager $10.2 billion was gathered during the first quarter, down from the $15.8 billion raised during the previous quarter and the almost $18 billion in the year-ago period. Our fundraising totals reflect capital raised by U.S. buyout and mezzanine firms for LBOs, real estate, infrastructure, distressed-debt control and related strategies, regardless of the location of the transactions. If the current pace persists, the total for the year will rival that of the 2002, when about $46 billion was raised.

“There are those GPs whose pipelines were not as full as they had anticipated,” said Jennifer Rinehart, a partner at global placement agency MVision Private Equity Advisers. “As traditional sources of deal flow fell away, groups needed time to reinvigorate deal flow. Many still need to complete one or two deals before meeting the threshold to launch their next fundraise,”

Meantime, limited partners have been reluctant to make new commitments in part because they remain on the hook for capital calls on previous funds. Investors also say they are concerned about the possibility of another bear market that could leave them experiencing another liquidity crunch. Jose Fernandez, managing director in the New York office of , an advisory firm for pension funds, sees many of his clients committing at about the same pace this year as last year, when many LPs slowed down. Only toward the end of this year or the start of 2011 does he see the pace of pledges picking up again. “If they see a year and a half of stability, their concerns about a double dip are going to be muted,” said Fernandez. Also, he added, many pensions are underfunded, so they’re looking for ways to add some kick to their long-term returns.

LPs that have cut back on their commitment paces this year include the $19 billion , which set a cap of $400 million for commitments this year, down from 2009’s $500 million and 2008’s cap of $800 million. Meantime, the $1.6 billion , with an actual allocation to private equity of 11.7 percent as of December, won’t be backing any firms for a while since it’s above its target allocation of 10 percent, although still within its range of 5 percent to 15 percent. (See the accompanying table for more on LPs plans for the year.)For general partners raising money, a market with a reduced supply of funds does present an opportunity to get heard, which may account for why industry specialists and smaller shops appear to be having some success in today’s market. Those striking it rich on the fundraising trail lately include infrastructure specialist , energy-focused and lower-mid-market firm . In shaky economic times, MVision Private Equity’s Rinehart said “there’s always been a flight to quality” by LPs. GPs that proved themselves during the tough times by having a performing portfolio, closing new deals and making distributions to their LPs are the ones that will have no problem getting their next funds raise. It’s especially true for strategies such as real assets, infrastructure, lower mid-market buyouts, growth strategies, financial services, operational turnarounds and credit solutions. “Those are still areas where people are very much looking for the right GP,” said Rinehart.

One reason for the popularity of infrastructure funds with LPs is the promise of a steady stream of income from cash-flow positive projects. They also tend to be long-duration assets, which tends to match up well with the long-term liabilities of pension funds.

Getting a lot of love from pension funds in the first quarter was , which closed with $4 billion in February, well above its $3 billion target. Alinda, whose first infrastructure fund reached $3 billion in 2007, is run by Chris Beale, who was previously head of infrastructure at Citi, Morgan Stanley and Credit Suisse First Boston. Alinda’s portfolio includes airports, a rail service, ports, toll bridges, gas pipelines and a water utility.

Alinda’s backers are mainly pension funds, including , and , but also include insurance companies, endowments and foundations. The committed $300 million, while the . pledged $250 million to Fund II.

really raked it in during the quarter, gathering $1.25 billion. The firm has raised about $2.6 billion so far toward its target of $3.5 billion for and will likely hold a final close by the end of the second quarter north of its target, said a source with knowledge of the situation. Energy Capital Partners launched the vehicle in December 2008, earmarking it for investments in North American energy infrastructure, mostly in the power generation, renewable energy, electric transmission and midstream gas sectors. Backers include the , , , and .

Energy specialist . also had some luck in the fundraising department with its first infrastructure fund, coming off a major score with its energy-focused buyout fund, which closed with $9 billion last year. The firm is targeting $1.5 billion for and has already gathered one-third of that. First Reserve plans to invest the fund in renewable and other types of power, as well as in electric transmission and utilities.

One firm struggling to raise its infrastructure fund has been , which recently had to slash the $7.5 billion target for its second infrastructure fund by more than half because it could not get enough pledges, according to Reuters. The firm launched two years ago and is working toward a final close, having reached its time limit on fundraising. The vehicle is earmarked for investments in transportation infrastructure, such as toll roads, airports and ports, as well as the gas, water and power sectors in North America and Europe. The firm’s first infrastructure fund closed in 2006 with $6.5 billion.

By size of fund, the sub-$300 million funds stole the show in the first quarter, nabbing more money during the quarter than did mega-funds of more than $5 billion.

Small funds seem to have captured the hearts of pension funds looking for managers who can really make a difference with their portfolio companies. The , for example, likes small to mid-market buyout funds with a targeted fund size of less than $1 billion, in part because they tend to focus on underserved markets where small companies need capital to grow. The also finds small and mid-size private equity funds attractive, as does the .

One small shop chugging along nicely toward its goal line is Boston-based , a lower-mid-market firm that invests in industrial products companies. The firm has thus far collected $160 million on the way to its $250 million objective, raising $50 million of it in the first quarter of this year. recently committed $25 million. The firm hopes to close , launched in 2008, by mid-year. The firm was founded in 2003 and closed its debut fund in 2005 with $125 million.

Another smaller GP, , has structured its latest fund so LPs can enter it continuously throughout the investment cycle, as previously reported in Buyouts. The firm hopes to raise while still focusing on new deals and its existing portfolio. The Washington, D.C.-based shop intends to hold a first close in the next several weeks, and then hold successive closes every three to six months. Perseus closed in 2007 with about $600 million. Fund VIII will likely target about that much, give or take $100 million to $200 million.

Perseus invests in undervalued or distressed investments; biotechnology and medical device businesses; and technology investments related to energy, environmental and engineering concerns. Backers include the New Mexico Educational Retirement Board, the , the Massachusetts-based and the .

The , a Houston-based mid-market firm closed in mid-March with $820 million. The firm not only raised the fund in 10 months, but also gathered a swarm of new supporters for the $600-million-targeted fund. New LPs include ., the , the New York State Teachers’ Retirement System and the . The prior fund closed in 2005 with $470 million. The Sterling Group invests in manufacturing, industrial service and distribution companies with enterprise values of $100 million to $500 million.

Looking ahead, expect the fundraising to take a gradual turn for the better as the year ages. With the pace of exits picking up and deal flow growing, it’s only a matter of time before more buyout shops need to replenish their war chests. According to the most recent survey by the Association for Corporate Growth and Thomson Reuters (publisher of Buyouts), 29 percent of the private-equity respondents said they expect to raise a new fund this year, while 22 percent said they will do so in 2011.