The New Mexico State Investment Council plans to allocate between $550 million and $650 million to private equity in 2016, according to state documents.

“I think we’ll stick to our pacing study pretty closely,” said spokesman Charles Wollmann. “We like to have some wiggle room, but $650 million is our target.”

The full $650 million would represent a $120 million increase from the total that New Mexico allocated to private equity last year, according to investment council documents. The State Investment Council committed $530 million across seven funds in 2015. Based on those funds’ cash flows, New Mexico staff expects roughly half of its 2015 commitments to count as 2016 vintage funds.

Market conditions could influence the State Investment Council’s commitment pace. If public equities continue to decline — the S&P 500 fell 6.6 percent since the start of the year — it could cause private equity’s share of New Mexico’s investment portfolio to climb closer to its 12 percent allocation target. If that happens, New Mexico is unlikely to allocate more than $650 million to private equity funds, Wollmann said.

“We continue to focus on re-ups with our core stable of managers as we shrink our base [number] of GPs,” Wollmann wrote in a follow-up email. “Mega funds continue to be generally out of favor with our PE strategy, though admittedly we have seen expansion of fund size among several of our key managers.”

New Mexico re-upped $100 million to one of those managers at its January 12 meeting. Leonard Green & Partners is marketing its seventh flagship fund with a $7.5 billion target, a $1.25 billion increase over the size of its 2012 vintage fund, Green Equity Partners VI. Fund VI netted a 13.3 percent internal rate of return through September 30, according to a New Mexico investment report.

In addition to re-ups, it’s likely New Mexico SIC will commit to one or two international vehicles, Wollmann said. New Mexico’s $1.4 billion private equity portfolio is heavily exposed to companies based in North America, according to investment council documents. As of September 30, the State Investment Council was 2 percentage points over its 70 percent maximum exposure range for North American businesses.

Approximately 13 percent of New Mexico’s private equity portfolio is invested in European companies. The State Investment Council expects its European exposure to climb over the next several years as recent commitments to global private equity funds and European specialists like Bridgepoint Europe V begin to mature, according to investment council documents.

Beyond re-ups and international funds, New Mexico investment staff did not provide any indication as to what sectors or industries they plan to focus on in 2016.

New Mexico committed approximately 60 percent of its private equity portfolio to buyout funds, with another 20 percent allocated to special situations strategies. The remainder of its portfolio is earmarked for growth equity and venture capital funds.

New Mexico had an 8.11 percent allocation to private equity as of September 30, according to an investment report. The portfolio netted an 11.2 percent net IRR and 1.43x multiple since inception as of the same date. 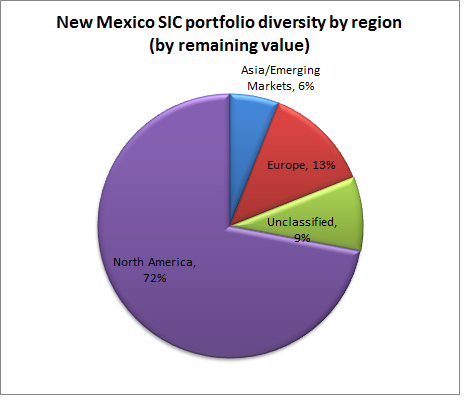 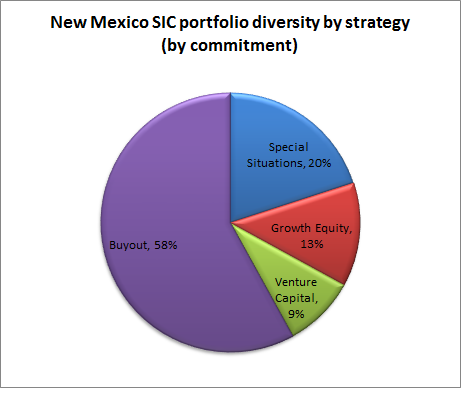