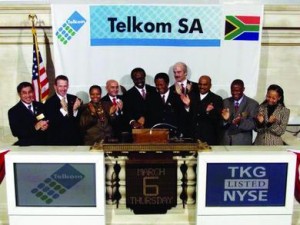 US private equity group Och-Ziff, and one of South Africa’s most prominent investment houses, Mvelaphanda, have made a multi-billion dollar approach for South African incumbent and fixed-line telecoms group Telkom.

The South African group confirmed that it had received a letter of interest from the two investment houses, which have put together a consortium to launch a possible bid, reportedly worth at least US$12bn.

Mvelaphanda is a South African Black Economic Empowerment investment company led by one of the country’s richest men, Tokyo Sexwale.

The consortium’s letter makes it clear that the offer will only be made if Telkom sells its 50% stake in the Vodacom mobile joint venture with Vodafone.

“Telkom received a non-binding proposal from a wholly-owned subsidiary of Vodafone Group to acquire a portion of Telkom’s stake in Vodacom Group subject to, inter alia, [Telkom] unbundling its remaining stake in Vodacom to Telkom shareholders,” the South African operator said in a statement.

If Vodafone increases its stake by 12.5%, as expected, the remainder could be listed on the Johannesburg Stock Exchange, with a small holding set aside for Black Economic Empowerment investors, according to some analysts.

Vodafone is understood not to be interested in full control of Vodacom, because of a black economic empowerment industry charter, which would force the UK telco to sell a 30% stake to black investors later on, if it went for 100% of the company upfront.

This is not the first time that Vodafone has attempted to take control of Vodacom. Last November, Telkom ended talks with the UK firm, after the South African telco failed to sell its fixed line business to pan-African mobile operator MTN, which itself could now be taken over by India’s Reliance Communications.