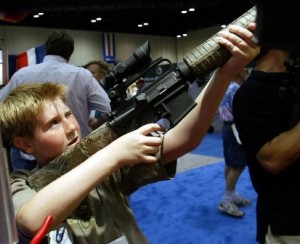 Cerberus boss Steve Feinberg has a clear motivation to offer the likes of gigantic pension funds like the California State Teachers’ Retirement System (CalSTRS) the choice to dump their Remington shares. He hopes it will allow his private equity firm to put this bloody chapter behind it and get to work raising a new $3.5 billion buyout fund.

There’s no question this was a victory for the social activists who led a push for public pension funds to shed their holdings in the arms business after the Sandy Hook Elementary School massacre two and a half years ago in Newtown – my hometown. Even rapper and former gun-toter Snoop Dogg made pleas for divestment. But what if there was a better way to effect change by convincing investors to behave more like shareholder activists than social ones?

CalSTRS and the other limited partners in the Cerberus funds that own Remington, formerly known as Freedom Group, have a month to decide whether to sell their shares to Remington or remain as investors. Most of them will probably just unload. The better, albeit more difficult, route would be to hang on and make some noise at Remington.

It’s easy to see why they’d want to be done with the whole episode. Selling removes the reputational stain of owning the top U.S. manufacturer of the deadliest consumer product known to man. It also becalms unruly constituents – in the case of CalSTRS, the teachers who have been pressuring them since the shooting. It does nothing, however, to reduce the problem of gun violence in America, which claims some 30,000 lives annually.

Under the mechanism Cerberus has proposed, Remington would no longer be owned by any of its funds, through which CalSTRS held a 2.5 percent slug of the manufacturer. Instead, Cerberus executives, Remington management and any investors who decide not to sell will be direct shareholders. Remington can then merrily continue manufacturing products like the Bushmaster ACR Patrol Carbine, whose marketing slogan is “Daily Heroism Demands a Tactical Advantage.”

In a sense, this might give Remington a whole new lease on life, not to mention an even greater incentive to hawk its deadly wares. At the end of last year, the company had 8.5 times more debt than its $98 million of adjusted EBITDA, so it sure needs to sell lots more guns to keep creditors calm.

It may suit Cerberus financially to be cashing investors out now, too. The firm is offering around $60 million for all of Remington’s equity, according to a person involved in the transaction. That sounds about right: Lazard puts Remington’s enterprise value at around $880 million; and the company reported long-term net debt of around $830 million at the end of last year.

That figure would arguably have been higher if Feinberg had put an offer on the table earlier. EBITDA, after all, hit $233 million in 2013 as the prospect of new gun regulations sparked a 64 percent surge in sales from 2011. As the threat of federal legislation diminished last year, Remington’s revenue dropped by a quarter.

Remington’s earnings volatility is not the only factor behind its low valuation. There’s also the stigma associated with owning a gunsmith after Sandy Hook. Cerberus actually tried to sell the business but found no acceptable offers. The situation is somewhat similar to the way tobacco stocks became an investment industry pariah two decades ago.

“Tobacco companies didn’t suffer because we sold our shares to other people,” Anne Simpson, director of corporate governance at the $251 billion California Public Employees’ Retirement System, said in a recent panel discussion in New York. Though she was discussing investing in hydrocarbons rather than guns, the principle was the same: “We need owners to behave like owners and not wash their hands and walk away.”

And here’s where those Cerberus partners mulling whether to dump their shares on moral grounds should reconsider. At the moment, their ownership confers on them a form of leverage that vanishes once they sell. With a seat at the table, they could put pressure on Remington to adopt better practices than the rest of the firearms industry.

They could, for instance, insist that Remington ensure all of its guns are sold through distributors who conduct more rigorous background checks, or that the company ramps up investments in developing weapons that won’t go off when a child finds them in a negligent parent’s nightstand. They might even demand Remington stop supporting the National Rifle Association.

Or they could just walk away, dump their stock on the cheap and let Remington – free from the constraints of any owners besides Feinberg and his fellow partners – sell all the guns it possibly can.

(Rob Cox is a Reuters Breakingviews columnist. The opinions expressed are his own.)