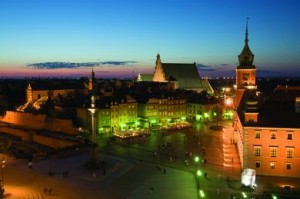 Surrounded by countries with deflated economies, volatile currencies and stagnant export markets, Poland is fighting fit. Boasting the largest domestic economy in Central and Eastern Europe (CEE) that has yet to experience the currency benefits of the European Union, Poland is now being hailed as the success story of Europe and could be the only economy to experience positive growth in 2009.

Poland’s success is mostly attributed to its powerful domestic economy. Unlike many CEE countries, Poland is not overly reliant on exports and its currency has proved it can bounce back in the harshest market climates. A testament to that strength, the Polish currency is actually regaining traction in 2009 with 19% growth since March.

The future of the Polish zloty looks bright according to a recent Reuters’ poll that revealed the zloty is expected to firm slightly in six months and gain 6% in the next 12 months. “Of all the countries in the CEE region Poland is doing the best,” says Thierry Baudon, founding partner of Central and Eastern Europe private equity specialist Mid Europa Partners. “The crisis has not hit Poland as badly as other countries and the zloty has already recovered 20% since the Lehman crash,” he adds.

In terms of investment in private equity in Poland, the country is also secure. According to latest statistics from the Polish Private Equity Association (PPEA), Poland saw the most investment activity in the CEE region, with €628m invested, making up more than a quarter of the regional total.

And according to Robert Manz, partner at Enterprise Investors and former founding president of the PPEA, LPs are staying put. “Investors who have already invested in Poland will see no reason to leave. The established players have a lot of funding and will remain in the region,” he says.

While the currency is rebounding and the economy resilient, the country is also facing a lot of challenges. There has not been a single fund raised so far in 2009 and newcomers who flocked to the region in 2006 and 2007 are retreating almost as fast as they arrived. The Carlyle Group was one such firm that attempted to set-up a buyout fund in the region, targeting Poland and many other countries in the region.

Having opened an office in Warsaw in August 2007, the firm was forced to scale back by November 2008 and had to shed 17 employees in the process. “Unless a firm has already set-up a fund specifically to target CEE they won’t be rushing to invest in the region now. Some firms were looking at this region opportunistically because they area was sought after by investors,” says Manz.

Poland may not be the most hospitable market for newcomers but for those who consider themselves regional players the country offers the most stable investment ground in CEE. “The M&A market is down but if you are on the ground in Poland you will be able to find the deals that are happening,” says Przemek Szczepanski, founding partner of Syntaxus Capital.

Poland was responsible for largest European IPO of first quarter of 2009 – manufacturing company Hydrapres which raised €4m. With just 18 listings in the three months up to March 31, raising just €9m, a third of all capital raised by European IPOs took place on the Warsaw Stock Exchange. It was also home to 10 out of the 12 CEE venture companies that received funding this year.

So despite the challenging global market, Poland is on a steady course for 2009. The death of the European IPO market has clearly taken its toll on Warsaw, but the Polish have been pragmatic in trying to pay off some of their deficit. With a budget deficit projected to rise this year to 27.2bn zlotys (US$9.05bn) from the 18.bn2 zlotys projected in January, Poland’s government is hoping to shore up much needed cash by selling the national stock exchange as well as privatise the mining and energy markets.

With a growing currency and a stable economy, full EU accession is looking more and more certain. By losing the zloty, Poland would be in a much better position to attract investors as a currency risk is often cited by investors as a reason to avoid Poland and the entire CEE region. “By 2010 the market will be recovering. Although we are unlikely to see the historical levels of leverage that we saw in 2006 and 2007, we will see senior funding in LBO transactions and things getting back to normal,” says Szczepanski.