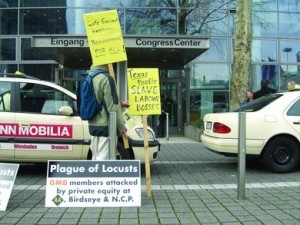 There was no getting away from it: private equity was now public business. And the fear was palpable. To be at Super Return this year was to witness an industry in the throes of panic, an industry concerned at the media attention it was getting and the increasingly vocal attacks from an anti-private equity movement that included politicians, regulators, trade unionists and ill-informed press coverage. It was a whole new world.

Of course in reality it wasn’t. At the very same event, on the very same stage the previous year, various speakers and panellists, notably ’s Damon Buffini, were telling the assembled movers and shakers that private equity has to sell itself better to the media and the public. Twelve months on, and the situation was much, much worse as the industry had been receiving a daily kicking from assorted critics for the last two months. As private equity raised its funds, opponents raised their game. The result is that the industry has allowed the initiative to be seized by the critics, has allowed the debate to be framed by those who view private equity as a malevolent force. By not undertaking a PR campaign a year ago the industry has allowed its adversaries to take the front foot, pushing private equity onto the defensive.

Private equity is news big news, public news, whether welcome or not. Bonderman said that 10 years ago there were five publications covering private equity (which of course included EVCJ, around since the early 1980s); today there are 25. Conference chairman Derek Zissman, vice-chairman of , pointed out earlier that there were 70 journalists at the conference, from the trade press, to the business press, to television channels (including the UK’s Channel 4), to the consumer press, including, to the amusement of some and surely a sign of private equity’s pull, a writer from Vanity Fair, who later popped up with a question to David Rubenstein, founder and managing partner of Carlyle, about Stephen Schwarzman’s, chairman and CEO of Blackstone, recent birthday party. Rubenstein declined to respond to a leading question about the extravagance of Schwarzman’s recent 60th birthday bash – which cost a reported £2.5m and included a turn from Rod Stewart – other than to say he went and enjoyed it very much.

The protestors outside the conference centre also seemed to be having a good time. Despite reports of a mass turnout (around 200 apparently), in the end only about 12 braved the brisk Frankfurt winds to stand outside. Nevertheless they were having a good laugh with each other and various members of the press and camera crews, handing out leaflets and holding up banners calling TPG “locusts” and even managing to make a derogatory statement out of the acronym “”.

The role of EVCA in the private equity debate should be a PR one. To date the organisation is best known for producing data and holding conferences, with a bit of lobbying on the side. The EVCA has to step up to the plate; it’s in an ideal position to be the main cheerleader for the industry, but it has yet to find its voice.

It could take some lessons from the BVCA, which is arguably in an even better position than the EVCA to lead the fight: it has more members than the EVCA and represents the most active private equity market outside of the US. The has long been involved with the various levers of government, fighting the industry’s corner and generally acting like the trade association and lobby group it is. It also has a good press presence. Peter Linthwaite and the odd other BVCA board member are often quoted in the FT and other national newspapers.

Conference veteran Jon Moulton, head of Alchemy Partners, said during one of the day’s discussions that he thought it was the responsibility of the BVCA and EVCA to spearhead the PR campaign. Certainly they have an important part to play, but it is also the duty of the big name firms, the ones who are fast becoming household names, to sell themselves. The mega funds are the ones who are bringing all the heat down on the industry, they should be the ones to tell the press that they aren’t the bad guys and to tell them the positive things they have done and what private equity ownership can bring to a company and the economy at large.

Damon Buffini, to his credit, has popped his head over the parapet, although that was more by accident than design after the GMB decided to make him their target following redundancies at the Automobile Association (AA). Regardless, Buffini seems to be handling the situation fairly well for someone who apparently has regarded the press with suspicion. The industry needs more like him.

It’s all well and good having Rubenstein and Schwarzman fly over here for a few hours to stick up for the asset class, but there’s a desperate need for some home-grown talent, like Buffini, to clear their throats. Indeed, one of the criticisms mentioned by more than one attendee to Super Return was the presence of too many Americans. This wasn’t an expression of Europe’s apparent, and overstated antipathy to all things Stateside; it was an acknowledgement that not enough European heads are prepared to take on such a figurehead-type role. Buffini aside, there isn’t really anyone else.

In his speech at the conference, Guy Hands, head of, as if anyone was in doubt, , was down to talk about the increasing size of European buyout deals: ‘How big is too big’. Hands told the expectant audience that in the light of recent events – “they are all gunning for us” he said – he was instead going to discuss the battering the industry was getting. He then praised the private equity chiefs currently trying to provide a face for the industry: “Damon Buffini, Stephen Schwarzman, David Rubenstein; I’m right behind you. A long way behind you.” He shouldn’t be (and in reality he isn’t). Guy Hands is a perfect industry spokesman: articulate, funny, friendly and eminently quotable, he is just the sort of person the industry needs to help it sell itself, especially as Terra Firma has investments in such companies as Odeon and UCI cinemas, Tank & Rast – the German motorway service operator – and WRG, the largest supplier of waste to energy generation in Europe.

“When the mob speaks, emotion wins,” Hands went on to say, and he was quite right, but this is what happens when you let the opposition take the initiative. Private equity is simultaneously easy and complicated to explain. The BVCA do a great job of putting it simply, laying out facts, one after another, on how many jobs are created, how the industry continues to outperform public equity; as BVCA chairman Rod Selkirk put it in his speech at the Chairman’s Dinner: “Jobs up. Sales up. Exports up. Investment up. These are the facts. So much for asset-stripping! So much for casino capitalism!”

The BVCA needs to keep repeating this message over and over again, and it needs to be picked up by the firms themselves. The current furore will of course die down over time when the unions find something new to focus on. Five years ago the Private Finance Initiative (PFI) and Public Private Partnerships – where the state pays contractors to build and maintain public utilities like hospitals, schools or the London Underground – was the bête noire on the GMB and its ilk, but that seems to have fallen by the wayside over the last two years. The same will probably happen with private equity, but the industry shouldn’t just adopt a siege mentality and wait until the storm blows over. Failure to act will affect deals: when you have an antagonistic union to deal with, deals will be harder to negotiate, take longer to complete, and cost more time and more money. Failure to act could impact on fundraising. The constant barrage of criticism flowing from the press will influence a pension board’s decisions; anecdotal evidence has suggested this is already the case where a pension board has been presented with an investment proposal only for noses to be turned up at the idea, based on the negative press. This won’t be an issue for sophisticated investors who will be aware of the returns private equity can produce, but it will be something less savvy investors will be prone to.

“Is there a natural fit in the economic order of things for private equity when it reaches this size?” asked Hands. “It is more likely there is a natural fit but it might be a bumpy ride.” Michael Meacher is one such bump. The former Department for Environment, Food and Rural Affairs minister trotted out the usual list of private equity criticisms in Parliament this month. Choice quote: “Private equity firms are going after healthy, well-managed firms, looting them – I do not think that that is an unfair word to use – in the interest of huge personal gains for themselves and often at the expense of substantial job losses for employees, and often crippling the companies with debt.” Whilst Meacher’s influence on the upper echelons of government has long since passed, his comments add to the groundswell. Combined with, and let’s be frank here, plain ignorant, lazy journalism, the private equity industry needs to fight back if it is to ensure that the political wind, currently in its favour despite political and media pressure, does not alter over the course of the year, forcing those with the ability to change regulation to succumb to pressure too great to ignore, and reacting by enacting crippling regulation.

The time to act was a year ago. Private equity missed that boat. The one sailing now is full of left-wing politicians, trade unionists and their journalist lackeys. It’s up to the industry, by sheer force of argument, to call it in, its time is up.