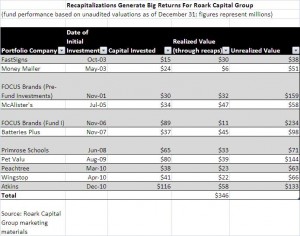 Money Returned Through Div Recaps: $346 million (as of December 31)

Marketing materials obtained by Buyouts show that the firm, which began investing in 2001, had as of year-end completed some 15 recaps—at least five in the last six months of 2011 alone—involving 11 of its portfolio companies (see accompanying table). Those 15 deals produced estimated realized returns of $346 million, or more than half of the $625 million in total realizations through year-end across Roark Capital’s first two funds and pre-fund investments, according to the marketing materials. The firm is best known for investing in franchise businesses, such as Carvel Ice Cream, Cinnabon and Moe’s Southwest Grill.

Dividend recaps are common across the private equity landscape, but they have generated controversy. Those hostile to Republican presidential candidate Mitt Romney have publicized instances in which Romney’s former private equity firm, Bain Capital, extracted dividends from companies that eventually ended up in Chapter 11. The implied charge? That Bain Capital had the companies borrow so much money that they couldn’t keep up with their debt payments.

Fortune magazine Senior Editor Dan Primack took dividend recaps to task in a recent column: “My complaint about dividend recaps is that it misaligns interests, and allows private equity firms to profit by placing extra burdens on portfolio companies that they control.”

But evidently many LPs aren’t holding dividend recaps against Roark Capital, which as of year-end was touting a 2.2x gross multiple and 31 percent gross IRR across all of its investments. A Form D filed with the Securities and Exchange Commission in April showed the firm had raised $462 million, or more than a third of the way to its target towards Fund III.