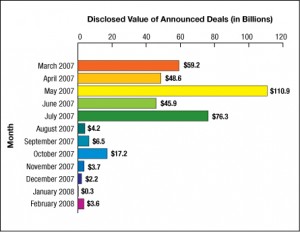 The fact that new mid-market deals are competing with the secondary market underscores the shift in how buyout deals got financed during the last investment cycle. A decade ago, the banks and finance companies providing senior loans to back mid-market deals largely kept the debt on their own books. But over time institutional investors in search of yield entered the market as primary buyers, and senior lenders evolved to take on the role of originators and syndicators. While still holding pieces of the debt on their books, they relied heavily on hedge funds, mutual funds and, overwhelmingly, collateralized-loan obligations to take up the rest. (CLOs accounted for more than half of the buying pool for LBO-backed leveraged loans in the 12 months leading up to June 30, 2007, having raised some $185 billion in 2006 and 2007, according to Lehman Brothers.)

The rapid development of an institutional market for mid-market loans fuelled the buyout boom in the middle part of this decade. But when the institutional investors abruptly pulled back in the credit crunch last summer, deal volume eventually slowed to a crawl as buyout firms struggled to find enough debt financing on favorable terms. In the last three months, institutional investors have slowly returned to the market, again in search of high-yielding securities. The problem for deal-makers: Investors have so much to choose from on the secondary market, particularly paper derived from mega-deals, that they’re showing scant interest in new mid-market issuances.

Not only are secondary loans backed by blue-chip companies trading for 88 cents on the dollar, but the notes are liquid and they’re secure enough to “put leverage on,” according to a hedge fund manager that formerly bought up mid-market debt. “It’s tough for a lot of people to play in the middle market because of what’s going on in the secondary market,” the hedge fund investor said. “Hedge funds that dipped into this market for yield are going to the secondary market.”

To be sure, stalwart mid-market players are staying put, cautioning against some of the risks that come with the secondary-market. Nearly all of the mega-LBO-backed loans available on the secondary market were issued during the last cycle. That means they have few covenants and often feature payment-in-kind options that allow companies to issue new debt in lieu of making interest payments. Both of these features, common in mega-deals, are largely alien to the middle market. “The price may seem really, really attractive, but if you pull out the document and look at the terms, they’re very different than what you’d find in a mid-market deal,” said Christopher Williams, senior managing director at Madison Capital Funding in Chicago. “The company itself may be great, but the credit agreement isn’t.”

But even players dedicated to financing new mid-market deals are finding the attractions of the secondary difficult to pass up. “If you’re a buyer with a dollar of capital, it makes more sense to buy seasoned paper,” said Ivan Zinn, founder of Atalaya Capital Management, a hedge fund managing $700 million of invested assets. His credit opportunity fund launched in 2006 with a focus on providing and holding loans to back mid-market LBOs. But the allure of the discounted secondary paper has, in a few instances, proven irresistible. “We’re doing it opportunistically,” said Zinn.

The upshot of the new dynamics in the secondary market has been a buyout industry that remains moribund. The number and disclosed dollar value of announced LBOs by U.S. sponsors has shrunk dramatically since July, falling from 123 new deals announced that month to a little more than 50 in February, according to Thomson Financial, publisher of Buyouts. Aside from what observers called the “dead-cat bounce” of October 2007, when the market ginned up a brief rally, U.S. buyout firms haven’t mustered 100 new deals in a single month since July. The disclosed value of announced deals in February reached $3.6 billion, mainly because of a single deal, the $2.4 billion LBO of Getty Images, while the disclosed volume in January didn’t even reach $265 million. By comparison, the industry announced 117 deals in March 2007, and those with disclosed values totaled nearly $60 billion.

No one can argue that the secondary market for senior loans isn’t attractive right now.

The term loan for Sunguard Data Systems, delisted by a bevy of buyout shops in 2005, traded above par as recently as June. But as of Feb. 21, it was changing hands at 91 cents on the dollar. The value of the term loan backing Univision, taken private a year ago, has fallen by about 20 percent since June, down to a little more than 81 cents on the dollar.

The falling prices for these loans, and dozens like them, have boosted the yield on the paper. In most cases, these are secured loans backed by solid, well-managed companies; the debt is rated and analyzed. Moreover, some companies have been paying off their LBO-backed loans for a few years, driving down their leverage ratios and driving up the quality of the credit.

Among the forces sending prices lower has been the forced liquidations of many fixed-income portfolios. Managers of so-called market-value collateralized loan obligations, for instance, have been forced to sell off their holdings as interest rates drop. Between Jan. 18 and Jan. 23, 10 CLOs breached their total rate of return triggers, which could force the funds to dump their entire loan holdings.

Buyout-backed paper has also flooded the market from hedge funds required to sell off their holdings in order to meet margin calls from lenders and investors. Due largely to these “technical pressures,” an index tracking the prices of publicly traded senior loans fell by 3.2 percent in January, its worst month ever, according to credit analysts at Morgan Stanley. The average par value has dropped by 11 cents over the last seven months, according to the analysts.

Ironically, the market has even attracted buyout firms, who have scrambled to raise funds geared to buying the seasoned paper trading on the secondary market, along with the hung debt still sitting on banks’ balance sheets. Even the newest mezzanine vehicle raised by Goldman Sachs & Co., a $20 billion pool, has become a buyer of mega-market senior debt, according to several sources.

When the credit crunch began last summer, some underwriters gamely tried to keep the LBO market afloat by putting more debt on their own books. It seemed to work for a while, as mid-market deal volume held up better than mega-deal volume for a spell.

Unfortunately, the receding tide of capital across all spectrums of the market has made it more difficult for senior lenders to find capital to make those loans. With the credit faucet turned off, lenders have found they have less cash to deploy. Banks, for instance, are no longer providing warehouse loans to back new CLOs, leaving the complex debt instruments dependent on repayments to provide new sources of cash. What’s more, lenders of all kinds are showing reluctance to spend whatever cash they have because it’s unclear whether the market has bottomed out.

The result is that whereas senior lenders a year ago bit off chunks of $10 million to $20 million, they now are capable of swallowing only $2 million to $10 million. Senior debt facilities of more than $200 million are nearly impossible to cobble together.

“What has impacted capacity the most is that the ticket size per deal is smaller,” said Kevin Burke, senior managing director of GE Capital Markets and head of the firm’s syndication desk. “Another factor is that with mid-market deals, although we target people who typically hold mid-market loans, many of those investors also have the ability to buy large-market deals that are trading at substantial discounts.”

Indeed, not only is the allure of the secondary market hoovering up available capital, but the secondary market is putting pricing pressure on new mid-market loans. To draw in buyers, underwriters have had to jack up spreads, often selling newly issued paper at a discount to par, sources told Buyouts. Interest rates on new credit, despite a falling LIBOR, remain high because spreads continue to widen and because lenders have instituted so-called “LIBOR floors” to offset the decreasing benchmark rate. Lenders have also given themselves much greater flexibility—in terms of revising pricing and covenants after a purchase agreement is signed—in order to make a market for syndicated buyers.

All of this has combined to create a dismal deal environment for sponsors. Because there’s less credit to be had, buyout shops have been chipping in more equity to get deals done, depressing eventual returns. Portfolio companies are also paying higher interest rates on debt, putting further pressure on returns. Lastly, portfolio companies have far less margin for error since new credit agreements contain more lender-friendly covenants.

And it’s not just sponsors that are feeling the heat. Lenders, too, are working in a market much more difficult than the one they’ve grown accustomed to in the last four years. The formerly simple act of finding buyers for a debt facility—and therefore closing a deal—is now a major accomplishment, regardless of the terms or how long it took to get the job done.

“Frankly, the definition of a successful syndication in this market is just getting to the goal line,” Burke said. “In this market, that’s something to be proud of.”