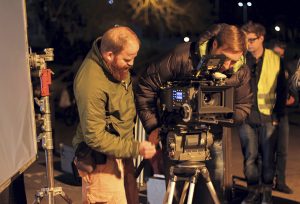 Shamrock Capital and Crayhill Capital Management LP took part in separate capital raises valued at a combined $350 million to invest in intellectual capital from the entertainment sector, the firms said.

The deals come amid rising demand for independent movies and films for newer distribution platforms such as Netflix, Hulu and Amazon Prime.

Russo told Buyouts the new fund has already made some private investments, but he declined to provide any details. The fund represents a separate, dedicated strategy at the firm, with no capital for its deals coming from Shamrock Capital Growth Fund IV LP, the firm’s flagship fund that closed on $700 million earlier this year, he said.

Russo said Shamrock’s past dealmaking in the entertainment industry helped it spot the potential for content, with an eye on demand for intellectual property from both the U.S. and overseas.

“Being who [we] are and having successfully invested in entertainment and media industry for many years, we’ve seen a lot of opportunities and have a point of view and perspective on it,” Russo said.

“We believe there are tailwinds today that benefit rights holders — those who own content – through the growth and proliferation of platforms that allow consumers to get access to content.”

He declined to comment on the pace of the fund’s deployment or the number of deals it expects to wrap up this year.

Shamrock currently counts about $1.8 billion of assets under management in the media, entertainment, and communications sectors, with portfolio companies such as Consilio, FanDuel and Screenvision. The firm closed Shamrock Capital Growth Fund IV LP on $700 million earlier this year.

Versa bills itself as the first lender in the industry to specialize in bridge financing for independent productions in addition to more traditional film financing.

Jeffrey Konvitz, co-founder and managing director of Versa Media, said bridge loans are routinely used in the entertainment industry to get film and TV productions off the ground until other forms of financing kick in.

Versa Media’s bridge loans will typically range from $500,000 to $4 million. They’re backed by collateral such as the copyright of the film and the “senior takeout facility” loan that provides the bulk of the financing for the picture, he said.

“The key thing in the business we’re in is to be able to evaluate the collateral,” he said. “It’s like looking at a house and being able to see the value.”

Along with Konvitz, Versa Media was founded by Jeff Geoffray, co-founder of Blue Rider Finance, and Daniel Rainey, a PE investor and lawyer.

(This story has been updated to include comments from Shamrock Capital and Versa Media Capital executives.)