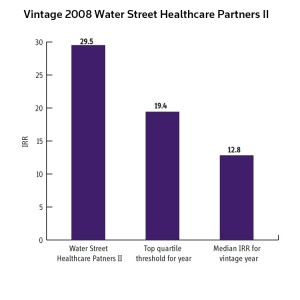 Tell us about the fundraising. Was this your first big institutional fund?

We raised Fund I as a true first fund when our team spun out of JPMorgan and formed Water Street in 2005. In August 2008, we raised $650 million for our Fund II just as the financial crisis was deepening. We had strong support from Fund I investors, as well as new investors, and were able to raise this fund in a matter of months. Our strategy is to invest in and grow healthcare companies within a targeted segment, and we leverage our industry network and our operating experience to help drive value creation strategies at our companies. This resonated with investors. In September 2008, the same month Lehman Brothers filed for bankruptcy, we closed our first two investments for our fund in a matter of weeks: a corporate carve-out through a partnership with Gentiva Health Services and an investment in HealthPlan Holdings. From there, we kept moving forward to implement our strategies.

How did you manage to do deals during the financial crisis, when credit was scarce?

We had several factors working in our favor. One, Water Street is solely focused on healthcare. While healthcare is not immune from the economic cycle, it’s somewhat insulated and lenders recognize that fact. Two, we’ve always been focused on driving returns through improved operating results rather than financial engineering. We’ve never been aggressive users of leverage. Heading into the crisis, we had low leverage in our companies, averaging less than 3x. While the number of active lenders in healthcare declined during the crisis, we have some very strong relationships with lenders that had worked with us, understood our experience, and were a steady source of capital as we were looking to grow our portfolio. We invested the majority of Fund II from 2008 to 2010 through the heart of the crisis.

The pace of investment and valuations during that period from 2008 to 2010 were pretty typical for Water Street. We had intended to invest the fund over four years and we were right on plan. The issue during the crisis was largely that companies simply weren’t for sale, as opposed to a gap in valuations. In our case, in all of the investments we’ve made across all of our funds, we have sourced proactively and outside an auction process. The downturn provided a catalyst with some sellers. We did not seek bargains nor buy distressed companies.

What were some of the deals that drove performance?

The entire portfolio for Fund II has been strong. We’ve had double-digit operating income growth across the portfolio for the past several years. To date, we have sold five of the 12 portfolio companies in Fund II and those five have delivered an aggregate return of approximately 4.2x invested capital. Importantly, each of those exits delivered a strong result, ranging from 3x to 5x invested capital rather than one company driving performance. As an example, we invested in OraPharma, a leading specialty pharmaceutical company in the dental segment and sold it to Valeant Pharmaceuticals in 2012. We built AAIPharma Services, a manufacturing partner for large pharmaceutical companies, and sold it to Cambridge Major Laboratories in 2013, and we built ConVerge Diagnostic Services, a New England-based reference laboratory, and sold it to Quest Diagnostics in 2013. Through those five investments, we’ve returned far more than the total invested capital for the entire fund.

Did Obamacare play any major role in your dealmaking for this fund?

When we raised the fund in 2008, Obamacare was not on the horizon as President Barack Obama had not yet been elected. In fact, the Affordable Care Act was not a material part of the equation for most of the investment period. Our interest level in specific sub-segments has changed somewhat over time as certain sectors have become more or less attractive as a result of the Affordable Care Act.

How did the fund contribute to the evolution of Water Street Healthcare Partners?

After investing in these companies—and each one has its own story—we worked to develop value creation strategies and leveraged our operating network to implement the strategy. The performance of this fund reinforced, for our investors, the stability and growth of health care and the unique ability of our team to execute. As a result, we had absolutely tremendous support from our investors in 2012 for Fund III, which we were pleased and surprised to raise in only a matter of weeks.

Do you consider Water Street as an early example of niche funds that have been gaining favor from LPs?

We are hearing from investors a heightened interest in specialist firms. Healthcare is certainly an industry where knowledge of the landscape is important. We have found in the last several years that investors are absolutely interested in specialist capabilities, the middle market, and having real operating expertise integrated into the firm. Water Street has all three. Half of our senior team are former executives of healthcare companies, and we have always been and always will be a middle-market focused healthcare firm.