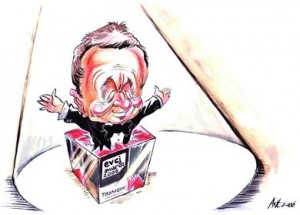 Though our gongs have been coveted for the past seven years, I would like to thank those of you that joined us at our inaugural awards dinner on 31 January at the Dorchester Hotel.

As our industry grows and becomes more sophisticated, the number of opportunities to congratulate ourselves also increases but one detail that set EVCJ’s event apart is that all of the proceeds were donated to Save the Children.

Our commitment to charity is not a gimmick we pulled out for the evening. EVCJ’s publisher, , has been donating proceeds from its events to good causes for a decade and in that time it has distributed over £11.4 million. EVCJ was honoured to be a part of Thomson’s philanthropic legacy and part of your night.

Your entertainer was a renaissance man who is described on his CV as “Britain’s sharpest impressionist and a one-man opposition party”– Mr. Rory Bremner.

We were thrilled to have the second funniest parodist in the UK after Jon Culshaw and you as our guests. Congratulations to all our award winners. And I hope that 2007 proves as fruitful for the private equity and venture capital industry as 2006.