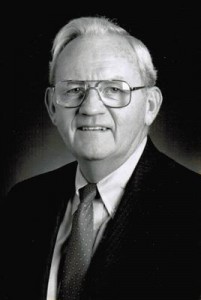 Judge, who died March 10 at the age of 83, became an independent member of the NEA board and ended up serving for some 18 years. NEA made an exception for Judge “because he was such a thoughtful and insightful guy and had such a history with the industry,” said Peter Barris, managing general partner at the venture firm, which was founded in 1977. “He was always someone who could add a lot of value.”

Barris recalls the time Judge advised the firm to become more focused—advice that NEA appreciated and heeded. “He never never minced words,” said Barris. “He told you exactly what he thought. He was very direct in that way.”

Other colleagues remembered this quality as well—along with a reservoir of good humor that Judge drew on to soften the message.

Back in the early 1970s Judge served as mayor of Little Silver, New Jersey. In a note to colleagues, James Kocis, founder of portfolio management software company The Burgiss Group LLC, where Judge was an early backer and adviser, recalled a story from those days that Judge would tell. ”When he became mayor, he opted not to take a salary,” Kocis wrote. “No matter how small the town, being mayor is a tough job. But Tom knew that he carried in his pocket an easy answer to someone who claimed that they paid his salary. ‘No sir,’ he would reply. ‘You do not. I take no salary.’ Inevitably, this would disarm his opponent.” (See full text of note below.)

T. Bondurant French, CEO of Chicago funds-of-funds manager Adams Street Partners and a fellow NEA advisory board member for many years, remembered Judge as a ”rather tall man” with “very good investment instincts” and “strong opinions” on various issues. “He could be very vocal about those opinions, which people liked, but he was also respectful at the same time,” French said. ”He was very good about couching his opinions in a way that didn’t put you on the defensive, whoever you were.”

Professionally, Judge played nursemaid to the private equity industry as one of its earliest advocates after the Department of Labor issued its 1979 “prudent man” rule, which cleared the way for corporate pensions to make alternative investments. In the foreword to the 2009 book, “Inside Private Equity: The Professional Investor’s Handbook,” Judge wrote that he started investing in venture capital in 1980 on behalf of the AT&T pension fund, backing such firms as Alta-Berkeley in London and Japan Associated Finance Companies (Jafco). Over time the venture portfolio Judge managed (today managed by JPMorgan Investment Management) grew to commitments of $1.5 billion to some 180 partnerships managed by about 90 firms, according to a bio on the Burgiss Group website.

Judge was one of the first LPs to recognize the importance of managing distributions, hiring Warburg Pincus for the job. In 1987, according to the foreword, he developed the idea of vintage year benchmarking to better understand the performance of his fund managers. Around 1990, he and Bart Holaday, then managing venture capital for First Chicago, developed one-page valuation guidelines for portfolio companies that became widely adopted after getting a public nod from Stan Golder, the late founder of Chicago buyout shop GTCR. Along with Bob Black, then of Kemper Investments, Judge hosted a meeting of LPs at the Marriott Courtyard outside O’Hare Airport near Chicago in November 1990—a forerunner to today’s Institutional Limited Partners Association.

The accomplishments speak to the professional drive, investment judgment and foresight of Tom Judge. But it was his personality and the way he said and did things that perhaps made the most lasting impression on his colleagues. “He was willing to say what a lot of other people were thinking but were unwilling to say and we appreciated it,” said NEA’s Barris. “We didn’t always agree. But when he said it, we listened.”

Wrote Burgiss Group’s Kocis toward the end of his note: “His surname was his character. Tom could spot a phony a mile away, didn’t suffer fools and spoke plainly. You never had any trouble understanding what Tom Judge said or wanted.”

(Update: Since this story was published we’ve attached a remembrance of Tom Judge by his long-time colleague Austin Long of Alignment Capital. See PDF at right. Also, the full text of James Kocis’s note follows below)

Among many stories Tom would tell, one of the most memorable is the simplest. He ran for council, served, and then ran for and became mayor of Little Silver, New Jersey. When he became mayor, he opted not to take a salary. No matter how small the town, being mayor is a tough job. But Tom knew that he carried in his pocket an easy answer to someone who claimed that they paid his salary. “No sir,” he would reply, “you do not. I take no salary.” Inevitably, this would disarm his opponent. His was the true meaning of public service.

Tom worked at AT&T Investment Management Corporation (ATTIMCO) and I met him through my work with PaineWebber. Tom is the true father of Private i, having smartly wagered on two development efforts simultaneously– by then tiny Burgiss and the mighty State Street. We know how that battle turned out. As importantly, Tom helped define our pricing model. “Jim, as a Division Manager I have a certain discretionary budget every year. If you price your software as annual subscription, I can make that decision myself.” This was revolutionary at the time and this low, but continuous pricing model helped spur adoption and create discipline. Today it is standard practice across the industry.

At ATTIMCO, Tom put together the team that later became the JPMorgan Private Equity Group, and many of his hires including Larry Unrein, Sandy Zablocki, Laureen Costa, Brendan Cameron and Tom McComb are still there. Tom invented “Vintage Year” analysis and was the first to publish a formula for an expected liquidity premium on private equity. Along with a group of colleagues, he founded the ILPA, coming together in a hotel suite a Chicago’s O’Hare airport (though don’t look for that recognition on the ILPA’s website). These were the 1980s, and everyone knew that if you got Tom Judge to invest, your fund was going to succeed. Many of these early deals were done on a handshake, and many people owe their start to this great man.

Later, as we grew our business, I had the privilege of being able to hire Tom as an advisor to Burgiss. Tom has been quietly helping me for years, offering words of encouragement and direction (some of it tough love)  that I found invaluable. Tom and I became good friends. I was flattered when he agreed to write the foreward to our book Inside Private Equity.

His surname was his character. Tom could spot a phony a mile away, didn’t suffer fools and spoke plainly. You never had any trouble understanding what Tom Judge said or wanted. Although some called him “Mr. Judge,” he insisted on Tom, saying that “Mr. Judge” was his father.

Tom died yesterday morning. Husband, father, grandfather, employee, civil servant, advisor, friend. Tom came through with simple and sometimes blunt advice at many critical moments for Burgiss. Tom, through his support as a client, his sage advice, and in the evident faith he had in me, made all the difference in helping me build this company. Burgiss would not be Burgiss today without him.

I am the third owner of a plaque that Tom gave me when he retired from AT&T. It was given to Tom by his colleague Ron Golz. It is a quote from George Marshall and reads:

“It’s surprising what you can get done if you don’t care who gets the credit.”

Words he lived by.