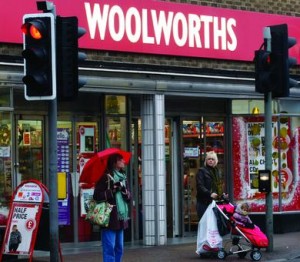 There is little or no prospect of raising a leveraged financing package to buy , making the prospect of a rescue buyout of the 800-store retail chain unlikely.

One senior loan banker said last week: “I can’t think of anyone who would provide debt to that business now. It will go to the wall.”

However, that view contrasts with that of administrator Dan Butters of Deloitte, who said the administration team had “received expressions of interest from a number of parties for both the retail and wholesale businesses”. Interested parties include private equity firms.

Woolworths Group-owned Woolworths PLC and Entertainment UK were taken into administration last week, with Deloitte’s Butters, Neville Kahn and Nick Dargan appointed as joint administrators. The administrators say they are looking for a suitable buyer, and have already received expressions of interest from a number of parties. Woolworths’ largest creditors are GMAC and the Bank of Ireland-owned asset-backed lender Burdale.

But with even healthy credits struggling to win financing, the prospects for distressed entities are bleak. Sellers of assets face a buyers market, where both equity and debt investors can choose from healthier businesses and more successful brands, with no incentive to lend to riskier prospects.

According to restructuring specialists, distressed-debt investors have looked at the retail sector but shied away from investing in favour of a focus on heavier industrials and other asset-rich prospects.

The move into administration came after the UK-listed parent failed to secure facilities from existing creditors to support a £100m divestment of Woolworths’ stake in DVD publisher 2 Entertain to co-owner BBC Worldwide, or to sell the retail business to restructuring specialist Hilco UK.

Woolworths Group is not in administration and remains in discussions with BBC Worldwide relating to the possible sale of its 40% interest in 2 Entertain. The Woolworths board had been in talks about selling the retail business to Hilco for £1, in a deal that would have seen Hilco assume about £300m of the group’s £385m debt.

Meanwhile, furniture retailer has also gone into administration in what looks like its final chapter after a management buyout in September failed to rescue the 111-store group. Last week, the furniture retailer appointed corporate restructuring firm MCR as administrators, and said 26 stores would close immediately. Administrators are now looking to sell all or part of the remaining business.