Signs are pointing downward as the Standard & Poor’s second-quarter report on the “weakest links” — portfolio companies with troubled debt — grows.

The April 22 report featured 78 PE-backed companies, representing more than $149.9 billion in affected debt. That matches the highest amount on the list in seven years, while surpassing the largest affected-debt total since the frozen credit markets of February 2009.

S&P’s monthly report also highlights those most at risk of defaulting with lists of portfolio-company defaults and bankruptcy.

The default list of portfolio companies grew to 18 from seven while the bankruptcy group doubled to six since Buyouts last published weakest links. And more are piling up, especially in the energy sector. Of those 24 companies, 14 are within the energy industry, which has been hammered by depressed oil prices.

Overall, energy and power account for 41 of the 102 companies on the weakest links, default and bankruptcy lists — by far the most of any industry.

Cliffs Natural Resources Inc, the Cleveland iron-ore-mining company, received a selective default rating on April 12 after it engaged in a distressed exchange. Cliffs, backed by Casablanca Capital, has nearly $4 billion of affected debt.

Midstates Petroleum Co accepted a default rating on April 4 after voluntarily filing for Chapter 11 bankruptcy. Midstates has about $2.5 billion in debt. Templar Energy LLC was given a selective default grade on March 23 after it missed an interest payment on its second-lien term loan. Templar has $2 billion in debt. Both oil-and-gas explorers are portfolio companies of First Reserve Corp.

All told, 243 sponsored and non-sponsored companies were on the list. The entire list has aggregate affected debt of about $371 billion.

To make the weakest links list, companies must have had speculative corporate-credit ratings of B- or lower with either a negative outlook or a negative CreditWatch implication on April 22.

From 1981 to 2015, an average of 6.4 percent of all global entities rated B-minus defaulted within 12 months. The average default rate was much higher for entities rated lower than B-minus. 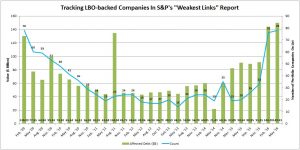