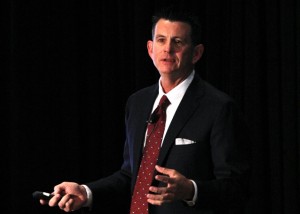 Even with the announced acquisition of PetSmart by BC Partners for $8.7 billion, mega buyouts of $5 billion or more remained a rarity.

By comparison, the largest deal to close in 2014 tipped the scales at $7.7 billion with a move by Kohlberg Kravis Roberts & Co to take its asset management arm, KKR Financial Holdings, private. That was followed by Blackstone Group’s $5.4 billion acquisition of industrial firm Gates Corp.

Larger deals from 2014 were still awaiting close as of press time: BC Partners agreed to pay $83 a share for PetSmart, with La Caisse de dépôt et placement du Québec and StepStone also contributing to the deal. Longview Asset Management, which has a 9 percent stake in PetSmart, will contribute a third of its holdings to the deal, according to a report by Reuters.

Other big announced deals for the year include the $14.6 billion acquisition of Tim Hortons by 3G Capital and Berkshire Hathaway, and the $9.2 billion take-private deal for supermarket chain Safeway Inc by Cerberus Capital Management.

The latest figures capped off a healthy second half of 2014, with a robust deal count of 446 acquisition deals and disclosed dollar volume of $33.6 billion in the third quarter.

Bankers and sponsors said ample credit conditions persisted for deals, with plenty of capital available, which drove up prices. The U.S. equities market continued to set records in the later part of the year, pushing up valuations in the private sector.

In the third quarter of 2014, the average purchase price multiple amounted to 10.82x EBITDA, with an average leverage level of 6.16x, according to S&P Capital IQ.

“There are very few sponsor-owned, mega-cap assets, and those that do exist are not for sale,” said Alison Mass, co-head of the financial sponsors group at Goldman Sachs. “So a mega buyout would have to come from the public market. Given where public market valuations are … it’s really difficult for a sponsor to make the numbers work.”

“Many of the largest firms have ample dry power, but they’ve exhibited a preference to take less concentrated positions across their funds,” Mass said.

While private equity deal-makers have been taking aim at falling energy prices, volatility in some sectors, record prices for public equities and a sharper eye on fees and disclosure from regulators, U.S. sponsors remained adaptable in 2014.

“There’s not one thing that, in my view, is changing the game for these guys,” Mass said. “When our clients see market dislocation, they look at value and whether they can find opportunities.”

Although purchase price multiples have risen to 2007 highs, equity contributions are higher in deals, boosting interest coverage in loans.

“I don’t see a lot of similarities in the two periods of time,” Mass said. “It’s a much healthier environment now.”

Ryan Clark, managing director at Genstar Capital, said the San Francisco firm chalked up a busy 2014 for deals, including a lot of add-on acquisitions, particularly for Acrisure, which it acquired in early 2013. It’s inked 20 add-on deals in 2014 alone for the retail insurance chain.

“We’ve been extremely active on the acquisition front with Acrisure,” Clark said. “There’s no typical purchase price multiple on these, but it’s in the range of 5x EBITDA to 7x EBITDA.”

Clark compared Genstar’s add-on strategy to the “yards after the catch” statistic in football.

“You make the catch by buying the company, but a lot more work goes into what happens after the catch,” he said. “It’s a challenging market to find opportunities.”

Add-on deals also allow private equity firms to effectively wear the hat of a strategic buyer, since acquisitions of that stripe are handled through portfolio companies.

“As a strategic acquirer, you’re different from a private equity buyer,” Clark said. “We can find synergies that enable paying a higher price. We can also offer strategic capabilities or bring scale.”

Add-on deals also avoid the higher prices that kick in for companies with more than $50 million in EBITDA. At that level, “you move into a different market and pricing goes up because those deals have more access to higher leverage,” Clark said.

In another middle-market, add-on deal, Ranger Offshore, a portfolio company of SunTx Capital Partners, made its first bolt-on deal by purchasing the diving assets of Technip USA in the fourth quarter. Up until now, Ranger Offshore had been growing organically since SunTx bought the oil-and-gas-services platform three years ago with its SunTx Capital Partners II LP fund.

“It’s a transformative acquisition for Ranger Offshore,” said SunTx Managing Partner and co-founder Ned Fleming. “It doubles the size of the business and gives them key assets.”

Fleming declined to go into specifics about the deal, but said he felt the price was fair. “For us, it’s the growth potential that makes the acquisition terrific,” he said.

Looking ahead at the overall sponsored M&A market, Howard Lanser, managing director in Baird’s Mergers & Acquisitions group, said the firm’s deal pipeline is stronger now than it was a year ago.

“We think we could be in the early innings of a pretty significant M&A bull market,” Lanser said. “We feel that there’s room to run there and with the merger activity we’re seeing, we don’t see a material slowdown in activity. The momentum feels good, the economy seems just to be beginning to catch steam, and if the economy continues to move and push forward, it could be a very interesting year.”