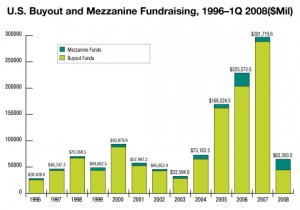 In the first quarter, Buyouts tracked a total of $65.2 billion raised by U.S.-based buyout and mezzanine firms for investments anywhere in the world. While that may not seem like a slowdown—last year’s first quarter saw about $68 billion raised—an eye-catching $20.5 billion of that amount is earmarked for mezzanine funds. That leaves a lackluster $45.0 billion raised on the buyout side. If the fundraising pace remains at this level for the rest of the year, 2008 will log a total of $180 billion in buyout fundraising, compared with an estimated $282 billion last year. And it looks like the pace will continue to slow as limited partners exhaust the amount of capital they can commit to private equity.

In contrast to the last few years, mega-funds didn’t set the fundraising pace in the first quarter. Upper-middle-market buyout funds did that: Those with targets of between $1 billion and $5 billion brought in $27 billion in commitments from LPs (see table, page TK). The mega-funds, those with targets north of $5 billion, raised just half that amount, hauling in $13.7 billion. On the smaller end of the middle market, funds with targets of between $300 million and $1 billion took in $2.96 billion, while funds with targets less than $300 million collected $949 million.

After sitting on the sidelines while debt was cheap and covenant-free, mezzanine funds roared back to life in the first quarter. “They’re coming out of the woodwork. There’s been a resurgence in mezzanine, particularly for mid-sized and smaller deals,” said William Walsh, managing director at Darien, Conn.-based . Walsh said he’s seen both the new and established mezzanine players come to the market with funds.

Mezzanine “is now more popular than ever because the pricing and opportunity is much better than they were, say, even a year ago,” added John Robertshaw, co-head of Credit Suisse’s placement agency. “You don’t have hedge funds lending as readily anymore. Sponsors want more loyal capital with relationships to mezzanine providers they’ve worked with in a variety of cycles.”

The market is also flush with secondary funds designed to buy existing positions in buyout funds from LPs looking to tweak or prune their own portfolios. “You get immediate exposure to a lot of vintages,” Robertshaw said of secondary funds, adding that LPs tend to pick at most three fund managers to handle their exposure to the secondary market. Lehman Brothers is targeting $1.5 billion for its sophomore secondaries fund, while raked in $202 million for its secondary vehicle during the first quarter, closing the fund at $702 million.

Many firms in the first quarter benefited from the desire by LPs to expand their portfolios beyond generalist buyout funds, said Credit Suisse’s Robertshaw. “Some institutions with mature portfolios are looking for outperformance with specialized opportunities … whether it be financial services, whether it be health care, whether it be media,” he said. “If you have a proven track record of delivering 300 to 700-plus basis points over your competitors in an area, LPs are willing to take a risk to invest.”

In March, , a lower middle-market firm based in Chicago, closed on $500 million for its sophomore fund, which it had no problem raising. “I think with the right product, investors are still very committed to the private equity space and perhaps increasing commitments in many cases,” said David Chandler, a partner at the firm. He said European investors, particularly insurance companies, were especially keen to get access to his fund.

Portfolio Advisors’s Walsh echoed Chandler’s sentiments, saying the vast majority of his firm’s LP clients were looking to hike their allocation targets to private equity. “Let’s face it, they’re not making any money in fixed income, because rates are 2 percent or 3 percent. And the stock market’s going nowhere,” he said. “We have several clients that have asked us to formally give them reasons to increase their allocations to alternatives. We have nobody going down.” Among the sizable LPs who’ve raised their target allocations to private equity recently are the , , and the .Tougher Market

Of course, it takes time for board-governed LPs to raise their target allocations, and some are already running up against their limits, a development that doesn’t bode well for fundraising for the rest of the year. , and have all put temporary holds on their commitment schedules until the pace of distributions from general partners picks up.

“I think it’s going to trail off as the year progresses,” said Portfolio Advisors’s Walsh of this year’s fundraising, adding that GPs are also taking longer to deploy their funds than they have during the past two years. “I think it’s big numbers for the first and second quarters and then it goes down.”

Kelly DePonte, a partner with San Francisco-based placement agency Probitas Partners, said that the LPs he’s heard from are getting hit with what he calls “the double whammy.” First, many LPs set their targets as a percentage of their overall portfolios, the bulk of which are invested in publicly traded equities or bonds. Since the stock market has been contracting, portfolios have shrunk accordingly. The and the are two public programs that are brushing up against their target allocations.

Second, in deciding how much capital to commit to private equity in a given year, many LPs look at the amount of money they expect to receive in distributions from their existing GP relationships. “Since July of ’07, we just haven’t been seeing much money come back,” DePonte said, adding that more LPs will be affected by this dynamic as 2008 rolls on. “I don’t think that this year’s going to be a very good fundraising year.”

Those buyout shops likely to be hit hardest by a slowdown are those looking to raise their second vehicles. Such firms don’t necessarily have a lot of exits to show for their efforts; if there’s one thing LPs all say they need to evaluate performance, it’s a track record of exits.

Firms out in the market with second funds include , the infrastructure investment firm that closed its $3 billion debut fund in 2005, as well as three firms that specialize in health care: , and . Health care is also a sector of interest for , which is seeking $3 billion for its second fund and also focuses on energy and media companies.

Another indicator that a fund-raising downturn has arrived is that some general partners are taking longer to raise their funds. The delayed a first close on its latest fund from April to early summer, while TPG recently delayed a closing on its latest $18 billion mega-buyout fund. , a Philadelphia-based mid-market firm, held a closing at the end of March that was initially slated for January or February. And Newtown Square Pa.-based , which focuses on mid-market manufacturing companies, was hoping to hold a single close on $600 million in January, but had to wait until March for a first close on $450 million.

One mid-market firm that launched its latest vehicle in late January is planning to hold a first close in May, where in other years it would likely have shot for an earlier date. “The process is moving slowly,” said the GP’s director of investor relations, who asked not to be identified. “LPs seem to have a lot to digest at this particular point in time.” Indeed, some LPs told the firm last fall that they wanted to commit 25 percent more to the new fund than they did last time. But when it came time to commit, the GP said, many LPs opted for only a 10 percent or 15 percent increase. Some investors even said they wanted to stick to their prior commitment amounts.