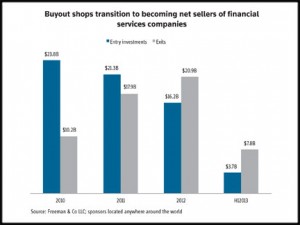 In the first half of this year, such exits, at $7.8 billion, were running more than double the $3.7 billion of acquisitions made by buyout shops around the world, the firm said. And in the 12 months ended June 30, exit deals and sponsor-to-sponsor handoffs accounted for 28 of the 50 largest deals, including eight of the top 10.

Still, with 25 transactions in the first half, financial sector exits are on track to fall short of the 57 exits that the firm tracked in 2012. Freeman tracks global financial deals in a number of sub-sectors: asset management, banks and brokerage, financial technology, specialty finance and insurance.

Part of the reason for the preponderance of exits is the dearth of new deals. Freeman projected full-year deal activity of $25 billion in the financial sector in 2013, higher than the $19.8 billion that would be annualized from the first-half activity, but still below the $27.1 billion of deals in the sector in 2012 and the $34.9 billion in 2011.

“However, when comparing 2013 to the preceding three years, there are more signals of positive momentum that make us cautiously optimistic about private equity deal activity,” wrote Michael Kasper, a director at Freeman & Co and the lead author of the report. He cited credit availability, strong equity market performance and efforts by sponsors to reduce their capital overhang, resulting in an increase in sponsor-to-sponsor deals.

CLOs in particular have rebounded strongly after slumping to near zero in 2009, the firm said, citing data from the consultant Bain & Co. CLO issuance climbed to $10 billion in 2011, $50 billion in 2012 and a projected $80 billion this year. CLOs themselves are not dedicated to leveraged lending, but an estimated 40 percent of broadly syndicated leveraged loans end up in CLOs, according to sister service Thomson Reuters Loan Pricing Corp.