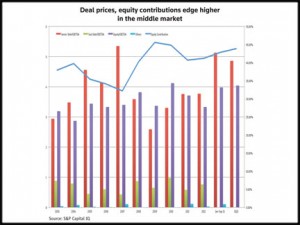 Overall pricing, at 8.5x EBITDA, climbed from 7.83x of a turn in the second quarter but was generally consistent with LBOs since 2011, as the economy recovered from the Great Recession. But sponsor contributions as a percentage of prices, at 30.5 percent of the price, remained below the levels of the boom year 2007, according to LCD, an arm of the Standard & Poor’s Financial Services LLC unit of The McGraw-Hill Cos Inc.

The equity contribution was equivalent to 2.8 turns of EBITDA, with 5.29x EBITDA of senior debt and a scant 0.11x of subordinated debt, near where that level has been all year, LCD reported, based on 29 third-quarter deals in the credit agency’s Capital IQ database. Sponsors have benefited from strong investor demand for leveraged loans, floating-rate instruments that provide attractive yields in today’s low interest rate environment and protection against future rate increases.

In the second quarter, the multiple was 7.8x EBITDA, with sponsor equity contributions of 29.6 percent, or 2.6x EBITDA, and senior debt providing 5.3x turns of leverage. Subordinated debt was negligible.

Mid-market sponsors paid more in equity to swing their deals than larger competitors, but transaction prices were lower. In the middle market, where LCD tracked eight deals in the quarter, the transaction multiple was 7.9x EBITDA, with equity contributions of 43.85 percent, or 4.04x EBITDA, and 4.86x EBITDA in senior debt and negligible subordinated debt. Providers of sub debt have found themselves squeezed at the conference table in recent quarters, as sponsors have taken bigger chunks of senior debt instead. LCD defines the middle market as companies with less than $50 million of EBITDA.