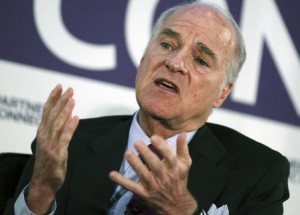 KKR has decided to combine its technology group with its media and communications team, according to a memo to its fund investors sent last week and seen by Reuters. It will also combine its retail team with its consumer group, the memo said.

The changes follow the retirement last month of Simon Brown, according to the memo. Brown headed KKR’s agriculture, chemicals, consumer products, and metals and mining investments. David Kerko who co-led KKR’s technology team, has also stepped down. Both Brown and Kerko continue to serve as senior advisors.

Herald Chen, who co-led technology investments with Kerko, and Richard Sarnoff, who headed media and communications, will be co-heads of the new technology, media and telecom group.

“We believe this realignment reflects the convergence of the Internet, technology, media and communications industries, with end markets and investment opportunities increasingly defined in digital terms,” Alexander Navab, head of Americas private equity, and Suzanne Donohoe, global head of KKR’s client and partner group, wrote in the memo.

Nathaniel Taylor, who currently leads KKR’s retail investments, will be the head of the combined consumer and retail group. KKR said in the memo that, as more retailers develop their own consumer brands and product companies seek to reach consumers directly, organizational integration was becoming more important.

Brown and Kerko are the latest in a string of KKR private equity team heads in the United States who have left the New York-based firm since its latest $9 billion North American private equity fund, NAXI, started investing in November 2012.

There was also change at the top. Navab himself became the sole head of KKR’s Americas private equity business last year when his co-head Michael Michelson decided to stand down to return to full-time investing at KKR.

To be sure, KKR’s recent private equity fund performance has been strong. NAXI was valued at 1.3 times its investors’ money net of fees as of the end of March, equating to a net internal rate of return of 21 percent, according to the memo.

NAXI’s predecessor, a $17.6 billion fund raised in 2006, had returned nearly 90 percent of its invested capital to investors and was valued at 1.6 times its investors money net of fees as of the end of March, the memo stated.

The reorganization at KKR comes as it prepares to raise a successor fund to NAXI. The New York-based firm said on its earnings call last month it expects the fundraising to start this year. About 60 percent of NAXI is now invested.

Founded in 1976 by Henry Kravis, George Roberts and Jerome Kohlberg, KKR had $99.1 billion in assets under management as of the end of March, $62.1 billion of which was in private equity and related asset classes such as infrastructure and real estate.