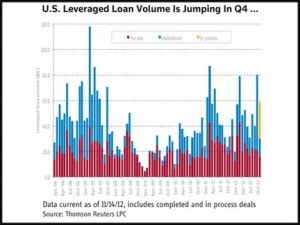 Leveraged lending activity has picked up late in 2012, even though M&A has remained sluggish, according to industry statistics and market watchers. The reason: A sluggish economy has dampened interest in new deals, even while record-low interest rates are spurring sponsors to seek liquidity.

As a result, financial sponsors and the borrowers they back are taking a variety of paths, including loan refinancing, dividend recapitalizations, and sponsor-to-sponsor sales as a way of monetizing their investments.

And with interest rates likely to remain near historic lows, investors in debt are likely to continue to favor private-equity deals for their relatively hearty returns, even though the economic outlook remains uncertain. “This market is providing yield in a universe in which there are not a lot of places to find yield,” said Christina Padgett, a senior vice president in the corporate finance group of Moody’s Investors Service.

“In a modest and tempered recovery, that plays well to credit as an investment, especially in this market.”

In one example of sponsors’ capitalizing on credit opportunities, Hearthside Food Solutions, which is backed by Windpoint Partners, launched a $433 million refinancing and recapitalization loan in November, according to Thomson Reuters Loan Pricing Corp. It was Hearthside’s second recap of the year. The company raised a separate $400 million credit facility earlier this year to refinance debt and to pay a dividend.

In the first six weeks of the fourth quarter, the U.S. leveraged loan market was processing $138.72.8 billion of leveraged loan volume in the United States, compared to $120.4 billion in the three months that ended Sept. 30, according to the latest data from LPC. If the pace keeps up through year-end, loan volume could reach the record levels of 2007, LPC said.

At the same time, LBO volume continues to be light, at $49.5 billion with six weeks to go in 2012, compared to $64.8 billion in all of 2011, LPC reported. This year’s LBO volume promises to come in somewhat ahead of 2010’s, when sponsor-backed companies closed $45 billion of LBO loans.

The investment bank Baird cites similar statistics. As of the end of the third quarter, LBO deals represented only 11 percent of leveraged loan issuance this year, compared to refinancing deals (which represented 47 of issuance), non-LBO acquisitions (20 percent), recaps (13 percent), and other transactions (9 percent).

“High quality deals are getting done all day long. Mid-quality deals that would have have had no problem getting done in ’11 are tougher to get done in ’12,” said Howard Lanser, a managing director at Baird and head of its U.S. debt advisory business. He blamed a dimming outlook, with higher taxes and increased regulation around the corner, which could lead to weaker economic growth.

“You take a seller who thought he was getting 8x in July,” Lanser said. “Now with this uncertain environment, this anti-business environment, projections are getting haircuts, and valuations are coming in a turn lower, when we get to final bids, than they were in July. That is causing sellers to pull deals from the market, asking should we do a dividend recap instead.”

The researchers based their findings on a dataset covering more than 8 million private firms in the U.K. during 1995-2010, of which more than 150,000 had entered formal insolvency, for a paper that is awaiting publication in an academic journal.

“We found that survival rates are better overall” for sponsored companies, Wilson said. If anything, buyout-backed companies probably have done even better looking at the period since 2004, when the United Kingdom adopted rules for a workout procedure similar to the American Chapter 11 process.

The financial sophistication of sponsors benefits their portfolio companies, Wilson said. “If they do get into difficulty, they’re in a better position to renegotiate their finances than other types of companies and resolve the crisis,” he said. “Private equity groups have more power to restructure the finances and keep the company afloat and recover.”

But economic uncertainty, such as the “fiscal cliff” looming over Washington policy-makers in December, is likely to deter deals and hold down activity, said Lanser of Baird. “We know taxes are going up for sure, don’t know how much. We know we’re going to have an anti-business environment. We know that Obamacare is going to wreak havoc on the costs of middle market companies. We know that for a fact. We just don’t know how much it’s going to cost. That’s the problem.”

But as long as the economy continues to rock along, even if only slowly, the greater the appeal that leveraged loans are likely to have for investors, said Padgett of Moody’s. “And you don’t have to count on growth, which you do have to count on in the stock market.”