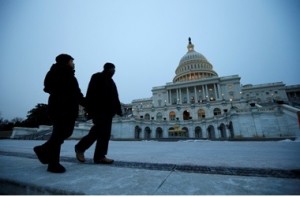 Buyout firms, as well defense contractors such as Lockheed Martin Corp, are looking to sell their low-margin government services businesses because company valuations are recovering as government spending, which took a nosedive following the end of the wars in Iraq and Afghanistan, begins to stabilize.

PAE is receiving financial advice from Houlihan Lokey on its potential sale, while Morgan Stanley is advising it on a potential initial public offering, the people said.

The sources asked not to be named because they were not authorized to speak about the talks.

Arlington, Virginia-based PAE provides the U.S government and other countries with support in aviation, logistics and training, around the world. Its clients include the U.S. Department of State mission in Iraq in its Baghdad Embassy Compound and the U.S. Consulate General in Basrah.

Lockheed Martin sold PAE to New York-based Lindsay Goldberg in 2011 for around $350 million, Reuters reported at the time. On July 20, Lockheed announced it would seek to exit some of the services businesses it had retained.

Founded in 1955, PAE has attempted in recent years to move into more sophisticated segments of government services through acquisitions. In January, PAE acquired a unit of U.S. Investigations Services LLC which offers litigation support and biometric capture as well as construction surveillance and security consulting.

PAE says it currently employs 15,000 people in over 60 countries.