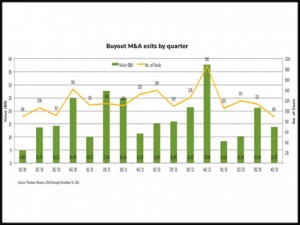 Thomson Reuters, the publisher of Buyouts Magazine, tracked about 426 M&A exits involving U.S.-based financial sponsors in 2013 through December 13. Of these transactions, 124 disclosed their financial terms for a combined total of $53.76 billion. Unlike last year, only 13 exits via mergers or acquisitions reported terms above $1 billion – the average deals size was below the $500 million mark.

The tally for 2013 came in short of the M&A activity recorded in 2012, when 559 transactions were completed by U.S.-based financial sponsors. Similarly, the disclosed value of 2013 deals was well below the $90.38 billion recorded in 2012.

The softening M&A exit market and red-hot IPO market seem to have added up to a solid year for limited partners. In a presentation this month at the Buyouts Texas conference, Erik Hirsch, chief investment officer of Hamilton Lane, a leading advisory shop, reported that 2013 was the single best year for liquidity ever, and 2014 could be even better.

In the last quarter through Dec. 13, four of the 89 completed deals had values of over $1 billion. The quarter’s largest M&A exit was the acquisition of Neiman Marcus Group Inc, a Dallas-based owner and operator of specialty retail stores, by an investor group comprised of Ares Management LLC and state-owned Canada Pension Plan Investment Board. The secondary leveraged buyout transaction was completed for an estimated $6 billion in cash. Sellers included Leonard Green, TPG and Warburg Pincus LLC.

Another investor group, comprised of Crown Acquisitions Inc, Highgate Holdings Inc, Vornado Realty Trust and Oxford Properties Group, acquired 650 Madison Avenue, a New York-based owner and operator of office and retail buildings, from The Carlyle Group LP, for just under $1.3 billion. And rounding out the top M&A exits over $1 billion was Sumitomo Corp of Japan, which acquired the entire share capital of Edgen Group Inc, a Baton Rouge, La.-based wholesaler of specialty products for energy infrastructure, from Jefferies Capital Partners Inc, for $12 per share, or more than $1.175 billion including net debt.

For the year through mid-December, there were at least 50 companies with U.S.-based financial sponsors that had completed an IPO.

Sponsors took full advantage of the robust IPO market as an attractive exit vehicle for their portfolio companies.

The largest recent IPO by a company with a U.S.-based financial sponsor was the Dec. 12 debut of Hilton Worldwide Inc, which sold 117.6 million shares for $20 a share. The hotel group, which is backed by the Blackstone Group LP, raised over $2.35 billion when it went public on the NYSE under the ‘HLT’ symbol. As of Dec. 13, it was trading more than 10 percent higher than its initial price at $22.10 per share.

Another significant recent IPO was that of Antero Resource Corp, which is backed by Lehman Brothers Inc, Warburg Pincus LLC, Yorktown Partners LLC and another undisclosed firm. The oil and gas exploration services company went public on Oct 10 and sold 35.7 million shares at $44 per share. The stock, trading under the symbol ‘AR’ on the NYSE, has performed well from the start, and has gained almost 30 percent in value to finish trading on Dec. 13 at $56.39.

One of the strongest gainers is the Container Store Inc, the retailing services firm, backed by Leonard Green & Partners LP and Ardian SA, which went public on Nov. 11. The company sold 12.5 million shares at $18 a share, listing them on the NYSE under the symbol ’TCS.’