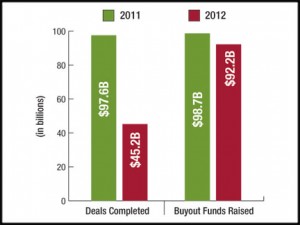 U.S.-based buyout and mezzanine firms have collectively raised about $21.6 billion in commitments so far this year.

One of the funds that added to the most recent total is Gores Group LLC’s Gores Small Capitalization Partners LP. The vehicle closed at its goal of $300 million.

Besides recent closings, other firms are gearing up to start their next investment vehicles. TowerBrook Capital Partners LP will seek to secure up to $3 billion for TowerBrook Investors IV LP. The New York-based shop’s predecessor fund closed in 2008 with $2.8 billion. Court Square Capital Partners of New York also plans to seek $3 billion. peHub reported on March 12 that the firm plans to hit Court Square Capital Partners III LP’s first close of $1 billion in April.
DEAL FLOW
Thomson Reuters, the publisher of Buyouts magazine, tracked 27 transactions involving U.S.-based financial sponsors from March 7 to 21. Five deals had known financial terms and these totaled $702.7 million. This brought deal volume for 2012 to roughly $9.7 billion.
Bi-Lo LLC was one of the period’s transactions. The Lone Star Funds-backed business acquired Winn-Dixie Stores Inc., a Jacksonville, Fla.-based retail grocery store chain. The deal had a rank value of $594.9 million.