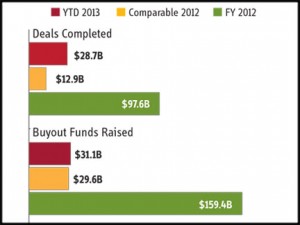 The major contributor to the total was KPS Capital Partners, which collected $3.5 billion in commitments in less than three months of fundraising.

On the deals front, U.S.-based financial sponsors completed 36 deals so far in April with a disclosed deal volume of $3.6 billion, according to Thomson Reuters, the publisher of Buyouts. The biggest deals of the month include Advent International’s purchase of the coatings resins business of Belgium’s Cytec Industries Inc. for $1.1 billion and Berkshire Partners’s purchase of New York-based Sidera Networks, provider of fiber-optic network services, for $2 billion.

For the year to date, the disclosed deal value for U.S. sponsors totals $28.7 billion, more than twice the pace of last year, when the mid-April tally was $12.9 billion, according to Thomson Reuters.