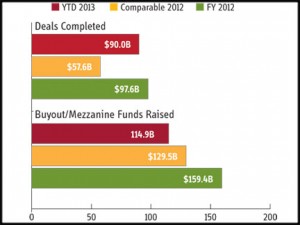 Notably, Catterton Partners reached a final close on its seventh fund at $1.6 billion. The consumer products-focused buyout fund was oversubscribed and reached its hard cap after initially targeting $1.2 billion.

On the deals front, U.S.-based financial sponsors completed 910 transactions in the year through Sept. 20, resulting in almost $90 billion in deal volume, according to Buyouts publisher Thomson Reuters. In the most recent two-week period measured, between Sept. 9 and Sept. 20, 40 deals were completed with a value of $6.9 billion for those transactions that disclosed financial terms.

The largest transaction of the period was completed by a special purpose acquisition vehicle created by Bain Capital, Golden Gate Capital, GIC Special Investments Pte and Insight Venture Partners to acquire the entire share capital of BMC Software Inc. The developer of enterprise software was purchased for $46.25 in cash per share, or a total value of $6.71 billion, in a leveraged buyout.