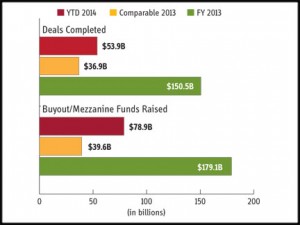 Included in the most recent fundraising figure is the $400 million raised by New York-based lower mid-market buyout firm ICV Partners for its ICV Partners Fund III. Similarly, the CapStreet Group raised $340 million for its fourth buyout fund, well ahead of its $250 million target, after approximately four months in the market.

On the deal front, Thomson Reuters, the publisher of Buyouts, tallied 45 U.S. sponsor-backed deals over the past two weeks. Of those that reported terms, the total value during the period came to approximately $1.3 billion, bringing the year’s aggregate value to over $53.9 billion in disclosed deal value.

Among notable deals, GTCR LLC, through a subsidiary, acquired the entire share capital of Vocus Inc, a Beltsville, Maryland-based developer of marketing software, via a tender offer for $18 per share and $77.3 in cash per Series A convertible preferred share, for a total value of $479.3 million.