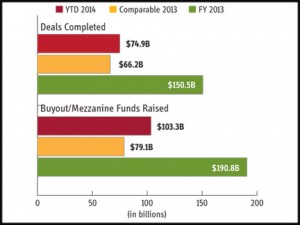 Notably, Quantum Energy Partners held a $1.17 billion first close on the firm’s sixth fund, which is targeting $2.5 billion. Also raising its sixth fund, Sun Capital Partners completed fundraising after 18 months in the market at $2.1 billion, below its $3 billion initial target.

Thomson Reuters, publisher of Buyouts, counted 54 newly closed deals among U.S.-based sponsors. The total value of these deals that disclosed their financial terms was just more than $15 billion, increasing the aggregate value of 2014’s deals to $74.9 billion.

The largest deal to close over the past two weeks was the acquisition of the entire share capital of Gates Corp for $5.4 billion in cash in a leveraged buyout transaction. The manufacturer of engineering products was purchased by The Blackstone Group LP from Tompkins Plc, a unit of state-owned Canada Pension Plan Investment Board and Onex Corp.