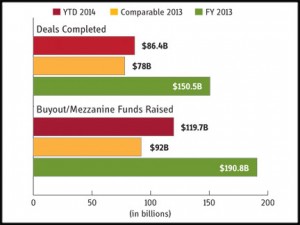 Among recent developments, Goldman Sachs raised at least $2.6 billion in commitments to GS Mezzanine Partners VI LP, the first major private equity fund for the bank since before the financial crisis.

On the deal front, Thomson Reuters, the publisher of Buyouts, counted 33 new deals in the last two weeks. However, only two deals disclosed their financial terms with a rank value including net debt of $68 million among U.S. sponsors during the latter part of July.

The largest deal to close over the past two weeks was when ALPHAEON Corp, a portfolio company of Strathspey Crown Holdings LLC, acquired PRN Physician Recommended Nutriceuticals LLC, a manufacturer and wholesaler of food-based medicine, for an estimated $55 million. In addition, Roadrunner Transportation Systems Inc acquired Integrated Services Inc, an Indiana-based provider of logical services, for $13 million.