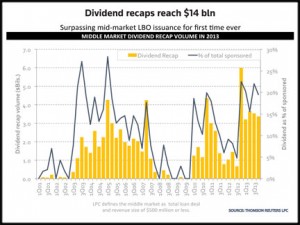 At that level, mid-market recaps surpassed LBO issuance for the first time ever, according to LPC, which tracks the loan market. LBO issuance fell by 45 percent in 2013, to $11 billion, and of that, 43 percent of the volume went to secondary buyouts, where one sponsor sells a portfolio company to another sponsor.

Capital flooded into the leveraged lending market in 2013, as yield-starved investors took on the greater risk of buyout transactions while the Federal Reserve pumped billions of dollars a month into long-term debt markets in an attempt to stimulate the economy by keeping interest rates low.

More than half of mid-market institutional term loans had a yield of less than 6 percent in 2013, up from just 17 percent in the prior year, LPC said. Yields tightened in the fourth quarter for refinancing deals and recaps but widened for M&A transactions.

On average, first-lien leverage on mid-market loans was 4.0x the EBITDA of the target company in 2013, with the average total leverage at a 5.1x purchase price multiple, including junior debt, LPC reported.

And the sponsor contribution to deals remained higher in the middle market, at 43.5 percent of deal values in 2013, fractionally higher than in the prior year, while sponsor contributions dropped among larger, broadly syndicated loans, to 31.0 percent from 35.8 percent in 2012.

Overall mid-market loan issuance reached $51 billion in the fourth quarter, bringing the total for the year to a record $204 billion, counting both sponsored and non-sponsored volume. LPC defines the middle market as $500 million or less in both company revenue and in the size of the total loan deal.