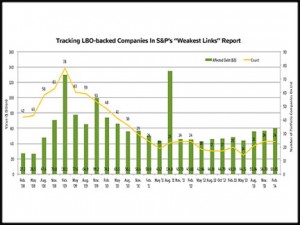 Overall, the number of ‘weakest links,’ both sponsored and non-sponsored around the world, fell slightly since Buyouts last reviewed the list. In S&P’s latest report, which was published February 28, there are a total of 152 entities with debt of approximately $258 billion. The last time Buyouts magazine reviewed the list in December, the tally stood at 153 and these companies had debt of about $248 billion. The count was based on ratings through November 19.

The 24 portfolio companies in the most recent report have aggregate debt of more than $60 billion. The number of LBO-backed companies identified in the report published November 26 was also 24 with a combined debt of $56.8 billion.

S&P includes entities on the ‘weakest links’ list if they have a speculative corporate credit rating of ‘B-‘ or lower; plus a negative outlook, a CreditWatch with negative implications, or both.

Despite the number of companies on the list with a financial sponsor remaining steady over the past three months, the amount of debt has crept up slightly, by over $3 billion. However, the latest figure remains significantly lower than the $134.8 billion recorded in August 2011 when the amount of affected debt peaked. Similarly, the 24 portfolio companies listed falls well short of the 78 reported in February 2009 at the height of the financial crisis.

Based on the number of overall ‘weakest links’ companies, the media and entertainment sector is the most vulnerable to default, comprising over 16 percent of the list. Similarly, banks and consumer products sectors also run a higher risk of defaulting as they are also disproportionately represented in the report. However, when looking at only companies identified as private equity-backed, the high technology sector runs the greatest risk of default, with five of the 24 companies listed (20.8 percent). Media and entertainment comes in second with four companies (16.7 percent) and both healthcare and retail/restaurants have three (12.5 percent), respectively.

Over the past three months, three new portfolio companies were added to the list while the same number was taken out.

In a unique case, Affinion Group Holdings Inc. was both removed and added to the list since the ‘weakest links’ report was last reviewed. The General Atlantic LLC-backed company was initially downgraded to ‘SD’ from ‘CC’ upon completion of a debt exchange on December 17, 2013; S&P viewed this as a distressed exchange tantamount to default. On December 26, 2013, S&P then proceeded to upgrade the U.S.-based integrated marketer to ‘CCC+’ upon the completion of the selected default. At the same time, the ratings firm issued a negative outlook due to the company’s weak medium-term operating outlook, increasing debt leverage and the significant risk of its large debt maturity in 2015. (Buyouts attempted to reach the sponsored mentioned in this story and include relevant comments where appropriate.)

Of the three portfolio companies that were removed, they were removed for a variety of reasons, from default to an upgrade to an outlook revision.

Artel LLC had its rating revised from ‘B-‘ to ‘CCC+’ on December 11 in anticipation that the company’s business operations will not be able to generate significant profits in order to maintain compliance with their financial covenants in coming quarters. It is not the downgrade that changed Artel’s designation as a ‘weakest link’ but rather its outlook being revised to stable due to company initiatives that will partly mitigate further revenue declines. The provider of satellite network services to U.S. Department of Defense clients is backed by Torch Hill Investment Partners LLC and TPG Growth.

Ascend Learning LLC was removed from the list due to S&P raising its corporate credit rating on the company to ‘B’ from ‘B-‘ as it is expected that the company’s liquidity will remain “adequate” following the successful completion of refinancing and operating performance that exceeded expectations. The Providence Equity Partners LLC-backed provider of healthcare-related educational services also had its outlook rated as stable and taken off the CreditWatch list.

As for the portfolio companies that joined, all three were added to the ‘weakest links’ count after having their ratings outlooks revised to negative or have their rating placed on CreditWatch negative while simultaneously having a ‘B-‘ corporate credit rating.

The pharmaceutical industry contract services provider inVentive Health Inc had its ‘B-‘ corporate credit rating outlook revised to negative from stable on December 11, 2013. The Liberty Lane Partners LLC and Thomas H Lee Partners LP-backed company had its outlook revised due to underperformance throughout 2013, particularly in the third quarter. The company is believed to need to generate “meaningful” EBITDA growth in 2014 while maintaining liquidity in order to be able to refinance upcoming 2016 term loan maturity.

Due to weak economic conditions in Puerto Rico adding pressure to operating performance, Caribbean Restaurants LLC had its outlook revised to negative on January 31. The San Juan-based Burger King franchisee, which is backed by Castle Harlan Inc, is at risk of a downgrade due to weak traffic trends and increased promotional activity despite refinancing its existing debt to improve covenant headroom and liquidity, S&P said.

A Default and Two Bankruptcies

So far this year, only one private equity-backed company has defaulted. On February 20, S&P lowered its corporate credit rating on MModal Inc from ‘B-‘ to ‘D’. This downgrade marks the first U.S.-based default this year and the third globally in 2014 (the first two taking place in Kazakhstan and Poland). The clinical documentation solutions provider is backed by One Equity Partners LLC and was given default status after it failed to make an interest payment on its unsecured notes two days earlier.

There were also two portfolio companies that filed for bankruptcy protection so far this year. On March 2, Sorenson Communications Inc filed for Chapter 11 bankruptcy due to the company being forced to consider restructuring as a result of declining revenue and mounting debt. The company, which provides video relay services for people who are hearing impaired and is backed by GTCR and Madison Dearborn, has estimated its assets of approximately $645 million and liabilities of about $1.4 billion, according to the court filing.

The second company to file for Chapter 11 in March was Prospect Park Networks LLC. The ABRY Partners-backed company filed its court documents on March 10 and states that it plans to wind down its business and operations. The producer of online broadcasts of soap operas ran into difficulty following a failed attempt to re-launch “All My Children” and “One Life to Live” online. Due to the failed online broadcasts, the company is currently in litigation against American Broadcasting Cos. In its petition to the court for bankruptcy protection, the company listed its assets in the range of $50 million to $100 million and $10 million to $50 million in liabilities.