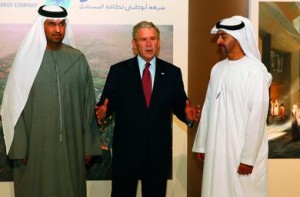 When Al Gore shot the movie – “An Inconvenient Truth” – little did he realise that it could inspire a cleantech initiative from the land of the oil-rich zone, the Middle East. A region that has been at the heart of the hydrocarbon emission problem, one of the key causes for global warming. According to the Human Development Report, the top three emitters of carbon dioxide per capita globally happen to be Qatar, Kuwait and United Arab Emirates. More importantly, water, power and environmental realities of Gulf countries greatly elevate the demand for many cleantech applications; they are a pressing necessity rather than a luxury and not dictated by short-term politics. Therefore, any cleantech initiatives emanating from this region are not only necessary but also could act as a pointer to the political economy surrounding green and clean technologies in the future.

Green policies were a cornerstone of 2007’s 17th national congress of the Chinese Communist Party. They were fundamental in the election of German Chancellor Angela Merkel and French President Nicolas Sarkozy, and are central tenets of all candidates jockeying for position for the 2008 US election. And, of course, 2007 came to an end with a new Kyoto-friendly federal government in Australia.

Though there are now quite a few cleantech initiatives in the MENA region, the clear standout from the pack is the Abu Dhabi-based firm Masdar (derives from the Arabic words for “power” and “source”) or Abu Dhabi Future Energy Company. The firm, wholly owned by the Government of Abu Dhabi through Mubadala Development Company, started in April 2006. The firm was mandated to ensure that Masdar enhances Abu Dhabi’s existing record of environmental stewardship and its contribution to the global community. Even more critically, the firm’s objective has been to diversify the dependence of the emirate on hydrocarbons in the light of the peak in oil production in the region. Sultan al-Jaber, chief executive officer of Masdar, says: “In the UAE today we do not suffer from a lack of energy security, but we never want to suffer from it. We are thinking ahead of ourselves.”

Abu Dhabi sits on most of the UAE’s oil and gas reserves, ranked respectively as fifth and fourth in the world. Proven oil reserves on their own are expected to last for another 150 years. But like most oil producing countries, the UAE also wants to diversify its economy in order to ease its traditional economic dependency on oil.

Masdar is planning the first zero-carbon/zero-waste/car-free city. In this regard, Abu Dhabi is in competition with Dongtan in China (expected completion of Phase I by 2010), which is trying to create the world’s first zero-carbon city on an island at the mouth of the Yangtse. The 6.5-square kilometre district, growing eventually to 1,500 businesses and 50,000 residents, will be home to international business and top minds in the field of sustainable and alternative energy. The US$22bn gulf zero-carbon city will take eight years to build and would be energy positive i.e. it would produce more energy than it consumes. Abu Dhabi will invest US$4bn of equity in the city project and borrow some of the rest. “We are creating an array of financial vehicles to finance the US$22bn development,” says Jaber.

The zero-carbon city would also house its own headquarters. The HQ complex will utilise sustainable materials and feature integrated wind turbines, outdoor air quality monitors and one of the world’s largest building-integrated solar energy arrays. Compared with typical mixed-use buildings of the same size, the headquarters will consume 70 percent less water. As part of the ambitious design for the city, water would come from a planned solar-powered desalination plant, and landscaping within the city and crops grown outside the city would be irrigated with grey water and treated wastewater produced by an expected water treatment plant. By implementing these technologies, Masdar City will save the equivalent of more than US$2bn in oil over the next 25 years, based on today’s energy prices.

One of the first initiatives of the firm was a US$250m clean tech fund, launched in 2006 with Credit Suisse, Siemens and Consensus Business Group. The Government of Abu Dhabi (through Abu Dhabi Future Energy) has put US$100m into Masdar, while Credit Suisse and the Consensus Business Group have put in US$100m and US$50m, respectively. The Fund invested approximately US$60m in leading funds focusing on cutting-edge clean technology. The remaining US$190m will target direct investments in companies sourced by the Fund and co-investments alongside fund managers. The fund’s portfolio includes equity stakes in Atlanta waste treatment start-up EnerTech Environmental; Seattle, Washington-based Halo Source, an antimicrobial and clean water solutions company; Austin, Texas-based thin-film solar developer Helio Volt; as well as the ever-popular Segway, based in Bedford, N.H.

So successful has been the fund in its first year that the firm is set to launch two more investment vehicles with over US$1bn to spend on clean energy and technology projects. While some may doubt the targeted fund raising amount due to the present credit crunch, the alternative energy financing area might not dry up completely. According to New Energy Finance, which tracks deals and money flows into the sector, the US$148.4bn in new investment in clean energy in 2007 was bigger than expected. Investment, including mergers, acquisitions and buyouts –surged from US$33.4bn in 2004 to US$58.7bn in 2005 to US$92.6bn in 2006.

However, as a preferred route to get clean energy, solar energy seems to be the best bet for the region. Despite its constant access to sunshine, only parking meters currently seem to be powered by solar energy in the UAE. Even solar water-heaters — popular in several sunny countries – are seldom seen. Other Gulf countries share a similar poor record in exploiting solar energy. But Masdar wants to take the UAE within six years from total negligence of solar power to becoming an exporter of solar technology. Says Jaber, “It is time for Abu Dhabi to start positioning itself as a (solar) technology developer. This is to maintain, and hopefully expand, Abu Dhabi’s position in the global market.” And the recent venture with Spain’s Sener Grupo de Ingenieria is an effort in that direction. The two firms will build three concentrating solar power (CSP) plants for €800m. The joint venture (40% owned by Masdar) will be called Torresol Energy and the first plant, Shams 1, will be ready in the Q4 2010. The CSP technology is a favourite with leading venture capitalists such as Vinod Khosla of Khosla Ventures who recently commented, “I am very interested in solar, and we do have a few investments in that regard, especially with regards to CSP technology.”

As another Masdar Initiative, the emirate’s umbrella group for all of its renewable projects, just signed a deal with the UK’s BP and Australia’s Rio Tinto for a 500 megawatt hydrogen-fired power plant for Abu Dhabi. The project, which would be the largest of its kind in the world, includes plans for carbon capture and storage. It’s expected to cost US$2bn, not including the investment in CO2 transportation and sequestration. The front-end engineering and design of the facility should be complete by the end of 2008, with the plant coming into commercial operation in 2012.

Cleantech funds and solar power plants are not the only lines of business. In January 2008, Masdar announced a US$15bn commitment to renewable energy in the emirate and a global cleantech research network.

Masdar is also investing in human capital by cultivating the scientific and human talent required for the new clean technology sector. It has established the Masdar Institute of Science and Technology (MIST), the Middle East’s first graduate-level, research-driven scientific institution focused on energy and sustainability, in cooperation with the Massachusetts Institute of Technology.

In a recent awards ceremony where Masdar was named “Cleantech Leader of the Year” at the Cleantech Forum’s Cleantech Awards in San Francisco, USA, Jaber summed up the firm’s mission statement. “We realise that these activities on their own are clearly insufficient to meet the scale of the problems facing our planet, which is why Masdar’s greatest hope, and our ultimate goal, is to inspire others to act”. And that’s what each one of us hopes for to save the human race from extinction.