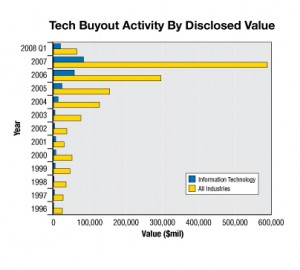 The business press is feasting on the $17.6 billion acquisition of less-than-thriving Freescale Semiconductors by , , and . Critics are also taking morbid delight in ’s $10.6 billion purchase of chipmaker NXP, which has plummeted 14 percent in value since the deal closed in 2006.

But if technology buyouts are so lethal, somebody forgot to break the news to Alex Slusky. “In terms of potential projects, we have been busier in the last three months than at any point in the last two years,” said Slusky, managing partner of San Francisco-based , a buyout firm that specializes in technology deals.

Despite a debilitating credit crunch that has paralyzed almost every other industry, mid-market tech buyout firms appear to be particularly active. They’re convinced they’re going to see another great vintage, just as they did in 2000 and 2001, when tech buyouts, on a dollar volume, accounted for 14 percent and 21 percent of all transactions those years, respectively, according to Thomson Reuters Markets. Already, the numbers are starting to bear that out. In the first quarter of 2008, the $19.7 billion in closed tech deals accounted for 31 percent of all buyout transaction deal volume involving U.S. sponsors.

Several factors account for technology’s resiliency. First, tech-focused buyout shops have plenty of money to spend. Leading the charge, last year raised $7.5 billion for its core technology fund, along with $726 million for a tech fund earmarked for mid-market deals. (The firm last week closed its mid-market fund, Sumeru, with $1.1 billion in commitments.) Among other tech specialists, last year secured $1.3 billion for its newest fund, brought in $1.7 billion for its latest effort, closed an oversubscribed $300 million fund earmarked in large measure for technology, as of the end of the first quarter had raised $775 million for a tech fund targeting $1.1 billion, and Vector Capital closed a $1.2 billion fund in July of last year.

Second, competition for deals appears to have eased, thanks in part to the departure from the scene of generalist firms scared off by some of the big deals that have seemingly turned sour. Indeed, a professional at one generalist buyout firm, contacted by Buyouts for this story, replied via email that the firm is no longer looking at technology, and was surprised to learn that other firms were still interested in the space. “We haven’t done tech buyouts recently,” the professional wrote. “Have you been able to find other folks who have been active in this arena in recent times?”

Also helping the tech buyout scene: the recent market correction, which has been particularly hard on tech companies. Though prices aren’t nearly as depressed as they were in the aftermath of the 2001 tech wreck, the Nasdaq is currently down about 400 points from its high of last November. In the networking sector alone, the stock prices of companies like Juniper and Foundry Networks have fallen anywhere from 25 percent to 35 percent for the year.

Meantime, fast-growing technology companies don’t require heavy leverage for great returns, and so the credit crunch is having less effect on buyout activity.

“Looking at companies during difficult times is a far better fit with our strategy than trying to compete in a bubble,” Slusky said. Since closing its $1.2 million fund last year, Vector has already invested about $120 million, and it’s looking to ramp up the pace from there. “We wanted to preserve capital for the opportunities that would arise from a general market downturn,” Slusky said. “We believe six to 12 months from now will be an absolutely perfect time to acquire technology companies.” Vector is currently evaluating a number of buyouts, spinouts and recapitalizations of mid-market tech companies.

The classic tech buyout remains the corporate divestiture of a non-core division that boasts recurring revenues and provides an opportunity for operational improvement under new ownership. But tech specialists also are looking closely at distressed deals and, when it makes sense and the dollars aren’t too big, they’ll even consider public-to-private deals. They also are eyeing deals where they don’t have to put any leverage to work.

One of Vector’s most recent deals was the spinout, in January, of Precise Software Solutions from software powerhouse Symantec. The company develops and sells application performance management software. Financial terms of the deal were not disclosed.

Slusky said his firm acquired Precise Software Solutions because of the depth of its technology, its impressive customer list, and its growth prospects. Plus, Vector didn’t have to use any debt to buy the company. “This was a case of Symantec being thoughtful and realizing that Precise was not part of their core business,” said Slusky. “They sold it to us on favorable terms in a deal that was applauded by their shareholders.”

That’s not to say tech buyouts are easy. Savvy buyout shops know better than to think they can sift through the rubble and pick up tech companies on the cheap, like they did in 2001. Naturally, the pullback in equity prices certainly provides buying opportunities. But since the credit markets are not cooperating, there is very little leverage available to complete the deals.

Another obstacle, said Neil Garfinkel, a founding partner of San Francisco-based , is that “many boards have not yet concluded that their current stock price is actually reflective of fair value, which makes acquisition premium discussions somewhat tricky.” Garfinkel believes premiums in technology have risen sharply over the past six months from historical norms, raising the risk of overpaying in a soft economy.

Firms that specialize in technology buyouts said it’s times like these that separate them from the generalist firms that like to parachute into the tech sector when the market is humming. “We founded our firm on the premise that subject matter expertise is the key to realizing superior returns over time,” said Garfinkel. “We think the technology buyout landscape looks pretty interesting right now. Market and economic turbulence provide opportunities to apply insight and expertise. We plan to be active, but of course the current climate requires us to employ a finer lens than in more robust times.”

Garfinkel added that technology, like any very large and very diverse industry, is nearly impossible to truly understand on a “part-time” basis. Given the rapid pace of change in technology versus some other industries, it requires perhaps even more specialization. That’s why partners at his firm sub-specialize by sector within the broader technology industry. For instance, Francisco Partners boast specialists in semiconductors, software, communications equipment, IT services, and health care IT.

It is this expertise that allowed Francisco Partners to invest in semiconductor company Numonyx in April.

Numonyx is a newly created joint venture between Intel Corp., ST Microelectronics and Francisco Partners. Essentially, Intel and ST contributed their respective flash memory assets, while Francisco Partners invested $150 million into the new company. According to Garfinkel, Numonyx is a good example of an investment that combines the firm’s sector experience (semiconductors) with the type of creative structuring necessary to get deals done in today’s environment.

Francisco Partners holds less than 10 percent of the company, while ST and Intel have roughly equal shares of the remainder. Although Francisco Partners has a minority position, it holds a security with favorable terms and an attractive valuation, and a governance arrangement that provides it with a great deal of influence, though not control. “The combination of low leverage (less than 1X EBITA), ample balance sheet liquidity, and senior equity position provides the right capital structure for Numonyx in this environment, while still generating attractive returns for Francisco Partners,” said Garfinkel.

Technology, like every other sector, has been affected by the credit crunch. Most noticeably, the squeeze has severely curtailed the massive public-to-private deals—such as the Freescale Semiconductor transaction—that garnered so much press attention over the past three years. These types of highly levered deals, with few exceptions, are not happening today. “The forgotten lesson during 2006 and 2007 is that companies with high operational risk [like technology firms] should not support high financial risk,” said Slusky. “Nonetheless, we saw a number of tech deals get done with seven- and eight-times EBITDA leverage, and this is simply imprudent.”

Slusky believes that the best technology deals are equity funded and operationally driven. “Tech deals don’t have to rely on the high availability of leverage,” he said. “We have done more deals with no leverage than we have done with high leverage,” including LANDesk Software, Savi Technology and Watchguard Technologies.

As for the possibility of a recession, buyout professionals believe that tech companies won’t be harder hit than the overall economy. Unlike 2001, when the tech sector triggered the recession, in 2008 it’s the financial services industry leading the way. “In fact, the tech sector, as a whole, has held up rather well from a fundamental basis,” said Garfinkel.

Some tech specialists even credit the credit crunch for bringing unexpected opportunities. “For us, the current situation is a net positive,” said David McGovern, managing partner at El Segundo, Calif.-based Marlin Equity Partners. Because the firm invests in financially distressed companies, it is seeing more cases in which banks are becoming owners of companies they don’t want. This has created a new source of deal flow—one that didn’t really exist when there was plenty of liquidity in the market.

Marlin Equity recently completed several mid-market software transactions, including the acquisitions of ERP vendors VantagePoint Systems and Chelford Group. “The types of businesses we buy are not hugely levered anyway,” said McGovern. The firm is working on several more deals involving “reasonably sized software companies,” he said. “We are seeing some very good opportunities right now. As the software industry continues to mature, the opportunity set continues to grow.”

Marlin Equity also sees plenty of venture-backed backed businesses that are ripe for the picking because they never developed into the billion-dollar behemoths that the venture groups hoped they would become. However, they remain attractive companies with stable revenue streams. “There are lots of software companies out there with $50 million in revenue, and we’re looking at them,” said McGovern.

That’s also the story coming from San Francisco-based Vista Equity Partners, a $2 billion private equity firm that invests in software businesses. “Our deal flow pipeline is as robust as ever,” said Robert Smith, managing principal at Vista Equity. The firm recently closed two acquisitions valued at more than $400 million; it is about to complete two more valued at $270 million. “Anytime there is dislocation in the market, opportunities arise,” said Smith. “It’s a question of whether you’re investing style suits that and whether you’re prepared to take advantage. Our model relies on achieving returns through the injection of sustainable operational leverage, not just financial leverage.”

Smith added that the credit market is far from dry for mid-market tech deals, and lenders like Wells Fargo Foothill and Silicon Valley Banks are still quite active. “Leverage for larger deals may be scare, but for smaller deals of less than $1 billion, credit is available from certain sources,” he said.

Last October, for example, Vista Equity acquired Sunquest Information System from Misys Healthcare for about $400 million, putting roughly $200 million in equity and borrowing another $200 million. The firm is currently working with several lenders on its latest acquisitions, scheduled to close in the coming months.

The message from technology shops, at least those that focus on the mid-market, is loud and clear. They’re still very much business and they’re looking to make a deal.