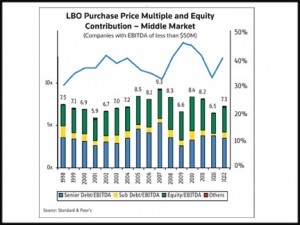 But viewed sequentially, compared to the fourth quarter, equity contributions were down, as were purchase price multiples, perhaps reflecting the slow pace of dealflow in the latest period, but strength in credit markets, according to LCD, which follows the leveraged lending market.

In fairness, the year-over-year comparisons may be skewed by the unusual circumstances of the year-ago period. The first quarter of 2011 followed the land-rush period at the end of 2010, when sellers rushed the exits over concern that the Bush tax cuts were poised to expire. By contrast, the quarter just ended was notably slow, according to both reports from dealmakers and the deal statistics as they come in.

Mid-market sponsors contributed 39.8 percent of deal value in the form of equity in the quarter just ended, up from 32.6 percent in the same period a year ago but down from 41.3 percent in the fourth quarter.

Sellers also were able to command a purchase price multiple of 7.3x EBITDA in the first quarter in the mid-market, higher than the 6.5x in the same period last year but below the 9.3x multiple they commanded in the fourth quarter. Senior debt accounted for 3.5 turns of EBITDA, down from 3.8x in the same period last year and level with the fourth quarter, while the equity contribution was 3.0x EBITDA, up from 2.4x in the 2011 period but down from 4.2x in the fourth quarter. LCD defines the mid-market as companies with less than $50 million of EBITDA.

Notably, the use of mezzanine financing increased sharply from a year ago, with sub debt contributing 0.7x EBITDA in the latest period, compared to 0.2x a year earlier. Mezzanine contributed 1.0x to pricing in the fourth quarter. Fees and expenses pushed total mid-market deal prices to 7.7x EBITDA in the most recent period.

Sticker shock may have been even greater for sponsors of large-cap deals, involving companies with more than $50 million of EBITDA. In that segment, equity contributions climbed to 44.7 percent of the deal value from 36.6 percent in the year-ago period, and also higher than the 42.1 percent of the fourth quarter.

In the large-cap segment, sellers were able to charge 8.6x EBITDA, up from 8.4x a year earlier, with senior debt leverage falling to 4.3x EBITDA and equity contributions climbing to 3.8x EBITDA, compared to 4.7x turns of debt and equity contributions of 3.4x EBITDA a year ago. In this segment, mezzanine finance still is contributing little, scarcely 0.1x EBITDA in either period. The fourth quarter featured debt of 4.9x EBITDA, equity of 4.2x and sub debt of .02x.

Including fees and expenses, sponsors paid 8.9x EBITDA to do large cap deals in the most recent quarter, LCD reported.

For all deals, sponsor equity contributions rose to 43.5 percent of deal prices in the latest quarter, up from 35.3 percent a year ago. Sellers received purchase price multiples of 8.3x EBITDA in the most recent quarter, compared to 7.8x this time last year. Senior lenders covered 4.2x EBITDA, while sponsors chipped in 3.6x, compared to 4.4x EBITDA of debt and 3.1x equity in the same period of 2011. On this blended basis, sub debt grew to 0.3x EBITDA from 0.1x a year earlier.