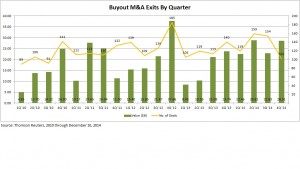 In the fourth quarter of 2014 through Dec. 10, the M&A exit market saw the lowest number of deals since Q3 of 2010. While that would normally imply a hindered output, the value of those combined deals was relatively high and Q4 continued what has been a momentous year. Thus far Q4’s total of $28.51 billion slightly trails Q2 for the accolade of being the top quarter of the year. And with about three weeks left in the year, the total for Q4 will almost certainly surpass the mark set in Q2.

The largest M&A deal of the quarter by value, including net debt, was the acquisition of Nuveen Investments Inc by TIAA-CREF Individual & Institutional Services LLC. The New York-based investment management firm had been a unit of Madison Dearborn Partners LLC; the deal was valued at $6.25 billion.

At first glance, it would appear the IPO exit numbers drastically fell off this quarter after Q3 posted a figure for total IPO value of about $23.8 billion. However, Q3’s total was buoyed by the enormous Alibaba IPO, which was nearly 92 percent of the total. After accounting for the outlier, Q4’s total of $4.7 billion looks strong in comparison based on IPOs identified by Buyouts. In another sign that the Q4 numbers were healthy, Q4’s total of 18 companies doubled the Q3 total.

The company that led the way as the flagship IPO exit for Q4 was Axalta Coating Systems Ltd, which had an IPO of $975 million in mid-November. Backed by The Carlyle Group LP, Axalta is a specialist in coatings, finishes, paints, and adhesives. Shares opened at $19.50, and have since risen over 34 percent to close at $26.21 on Dec. 12.