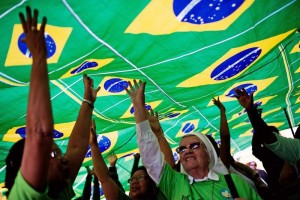 While economic activity is bound to deteriorate in coming months, buyout firms eyeing Brazilian investments for the long term may buy into assets whose value declined due to a sharp currency devaluation and a growing dearth of capital, said Fernando Borges, who presides over ABVCAP, a group representing buyout firms in the country.

While companies are still far from cheap, the recent correction in valuations left them more attractive, Borges and other senior executives told reporters at ABVCAP’s annual summit in Rio de Janeiro. Education, healthcare, consumer and retail industries are among the sectors drawing the most interest from buyout firms, he added.

Infrastructure, with a need of 50 billion reais of additional capital in the coming years, may attract additional commitments from buyout firms.

Infrastructure projects as well as energy and engineering companies are struggling for capital as the government curbs spending and a corruption scandal at state-controlled Petróleo Brasileiro SA limits access to debt and equity financing for some in these sectors.

With funds raising record money from clients and the amount of available money to invest at its highest level in years, 2015 looks set to be “a better year than the prior year, in theory,” said Borges, who also heads the Brazilian unit of Carlyle Group LP. “It won’t be a bargain market, though.”

The quality of available assets in the marketplace is “very good,” preventing valuations from falling further, the executives added. Still, the weak outlook for equity capital markets in Brazil, which could extend for years, may favor private equity firms as they are flush with capital, Borges noted.

Brazil was also the largest market for private equity and venture capital deals, with $4.57 billion in purchases through 141 transactions, according to Lavca data. That represented 58 percent of invested capital and 46 percent of deals in Latin America.

Advent International Corp, the private equity firm that last year raised the largest-ever Latin America-focused fund, is “really excited” by the outlook for activity in Brazil even as recent market and economic turmoil is hampering deals, a senior executive said on Tuesday.

Private equity deals in Brazil are growing more complex, Mussafer said at an event sponsored by ABVCAP. Advent increasingly relies on the knowledge of local staff to clinch deals, he told Reuters on the sidelines of the event.

“It’s a vibrant country, and we are very excited with it in spite of the headwinds,” Mussafer said, referring to Brazil. “Whatever the headwinds, our focus remains on the micro side of things: ‘What can we do to make this company grow?’”

Assets in the infrastructure sector, including those from engineering firms involved in a corruption scandal at state-controlled oil producer Petróleo Brasileiro SA, could be on Advent’s radar, Mussafer said. He did not elaborate.

Brazilian hospitals could also capture Advent’s attention, Patrice Etlin, an Advent senior partner in Brazil, said on the sidelines of the event.

While a recent sharp decline in Brazil’s currency might have made target companies more attractive, “in the long run things tend to average out” and returns become more correlated to the purchased company’s operational performance, he said.

Brazil remains the largest recipient of private-equity investments in Latin America, accounting for about 58 percent of the value of buyouts and 46 percent of the region’s deals.

Argentina may draw attention from funds, too, Mussafer said. Banks and investors are hoping that a new president, who will be elected later this year, implements a more business-friendly economic framework.

“I’m sure that some dislocations will come … I’d like to see things improving in Argentina,” Mussafer added.