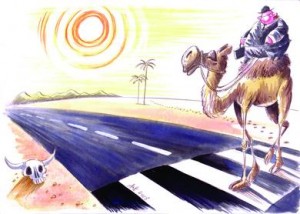 The heads of family offices and sovereign wealth funds in the Middle East are extremely savvy and have been educated at the world’s best institutions. It would be naïve to turn-up to the region in search of investors without doing ones homework. There is more sensitivity to cash returns among the family groups than the wealth funds. If you pay cash returns, they tend to roll them back into the investments. But if, after 18 months, the fund hasn’t paid out – they won’t come back in (p3).

It is thought that SWFs will adopt an investment regime similar to the US university endowments on the basis that their funds are perpetual for the benefit of future generations. This suggests that SWFs will invest through intermediate asset managers rather than taking the scary direct holdings of late. This approach will most likely provide the best risk adjusted returns for the funds and a way to diversify away from oil and gas-based revenues (p4).

But in this region the oil and gas sector can not be ignored and private equity houses are finding investment opportunities lower down the value chain of petrochemicals (p5). But this isn’t the only sector of interest in the region. Both local and foreign private equity houses are finding investment opportunities in infrastructure as governments realize that despite their massive liquid reserves, there is a huge value to be exploited in the private sector in the form of intellectual capital (p6). An emerging and interesting sector for private equity investment in the region is in agriculture. Large price increases in staple foods such as rice and wheat combined with surging populations have caused Middle Eastern Governments to look abroad for locations to produce food specifically in North Africa and PE funds are co-investing alongside them or selling/leasing land assets and equipment to these bodies (p7).

The geographic influence of the region is spreading. What used to be MENA – Middle East, North Africa has now become MENASA – Middle East, North Africa and South Asia. The acronym is a bit of a mouthful and encompasses countries that have very little in common, stretching from Morocco in the west to the Eastern tip of India (p12). Despite the increasing geographies of the Middle East there are still country specific investment opportunities and none more so than in the heart of the region in the Kingdom of Saudi Arabia. Private equity funds that have exposure to KSA are finding it easier to raise money in the region and lots of investment opportunity (p13).

This ambitious report highlights some of the most interesting regional stories written by journalists on the ground as well as in Europe and America. I would like to thank our sponsors Ithmar Capital and Citadel Capital for making this report possible.