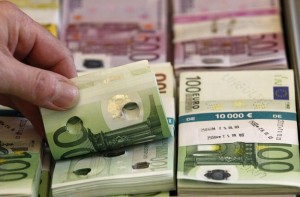 Cash-rich lenders are eager to finance deals and are favouring event-driven transactions in a bid to put fresh money to work.

A shortlist of potential buyers for French building materials group Saint-Gobain’s Verallia are expected by next week after first round bids were submitted on April 10, the banking sources said.

The sale of Verallia, which is being organised by JP Morgan and BNP Paribas, could reach more than 3 billion euros. Irish Ardagh and buyout groups such as Bain, BC Partners, Blackstone, Carlyle, CVC and Permira were expected to look at the asset.

Bankers are working on debt financing packages of 2.2 billion euros to 2.4 billion euros or 5.0-5.5 times Verallia’s approximate Earnings Before Interest, Taxes, Depreciation and Amortisation (EBITDA) of 441 million euros. Debt is expected to reach as much as 2.8 billion euros if undrawn facilities are included, the sources said.

The debt financing could comprise leveraged loans and high yield bonds, denominated in euros or dollars, the sources said.

First round bids were submitted last week and bankers are looking at financing a sale with around 575 million euros of leveraged loans or high yield bonds, the equivalent of 5 times Stahl’s approximate 115 million euro EBITDA, the sources said.

Debt could reach up to 690 million euros including undrawn facilities.

Elsewhere, bankers are working on debt financings of around 1 billion euros to back a sale of ICBPI or 6 times its approximate EBITDA of 150 million euros, the sources said.

Three groups of international investors are interested in buying ICBPI which could fetch 2 billion euros.

Debt packages of around 225 million euros are being worked on to back the potential sale of Dutch investment firm Gilde’s Bekaert, totalling up to 5 times the company’s EBITDA of around 45 million euros.

CVC and Investcorp are expected to be close to the sale process as are a few corporate buyers, the sources said.

CVC, Investcorp, Gilde, Wendel, Saint-Gobain and ICBPI were not immediately available to comment.