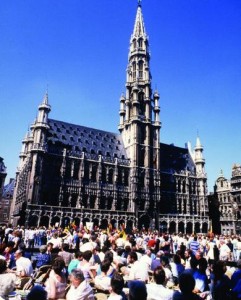 As the earliest supporters of the European project, it is no surprise that the countries of Belgium, Luxemburg and, in particular, the Netherlands have attracted investors from across the Continent.

Geert Raaijmakers, a partner at Dutch law firm , points to the adoption of the euro as a pivotal point.

“On average, 80% of shareholders in leading Dutch companies now come from outside the country,” he says. “It is now just as easy for institutions to invest in the largest companies in a sector throughout the eurozone.”

This wave of corporate deals has continued in the current year as well. Major domestic deals have seen navigation systems providers and eventually join forces in a €2.9bn deal and recruitment group buy for €3.2bn.

On the international front, US stationery supplier Staples has just received a recommendation from ’s board after raising its bid to €3.1bn. The Dutch target had resisted Staples’ overtures for more than four months.

However, in terms of leveraged buyouts of Benelux companies by international sponsors, the high point was undoubtedly reached in 2006.

A similar consortium was formed to buy out the semiconductor division of Dutch electronics group Philips for €7.4bn in August 2006. On that occasion, KKR and Alpinvest were joined by Silver Lake, Bain and Apax Partners.

In that year, another large club deal saw Warburg Pincus and Cinven team up to acquire cable television broadcaster Casema in a secondary buyout from Carlyle, Providence and GMT Communications for €2.1bn.

Two years later, the picture for buyouts in the Benelux region seems very different. Club deals faded from view in early 2007, after veiled threats from regulators, but corporates are not the only ones conducting large transactions.

Candover succeeded, after a protracted battle, in buying Stork for €1.6bn in January with support from Icelandic investors Landsbanki and Eyrir. And CVC, a perennial investor in the region, bought food wholesaler Schuitema from Ahold for about €185m in April.

However, there have been only a handful of buyouts worth more than €100m so far this year, aside from the ones just mentioned.

One interesting deal at the beginning of May saw Texas Pacific Group take a 25% stake in Strauss Coffee for €187m. This was the second buyout in the sector this year.

In January, another Dutch coffee producer, Drie Mollen, was acquired by Nordic investor CapVest in a secondary buyout from ABN AMRO Capital and . No sum was disclosed but last year made €300m in revenues.

Frank de Bekker of Rabobank, which provided all the debt, puts the financing at “up to €400m”. He adds: “This was the only Benelux leveraged finance transaction that was syndicated during January and February.”

After that sale, Dutch mid-market specialist Gilde failed in its attempt to take valve engineer private. Its €117m offer was trumped by strategic buyer , whose €133m offer has gone unconditional and is expected to complete in early July.

Other private equity firms, which still retain substantial amounts of equity, have been keener on taking minority stakes in targets and waiting until the debt markets recover in order to finance possible leveraged buyouts of the entire equity.

One potential deal on the horizon is the sale of Reed Business Information, the business magazine arm of Anglo-Dutch publisher . Private equity players are expected to bid for part or all of this division, which has been valued at up to €1.5bn.

At the end of last year, Apax teamed up with Guardian Media Group to buy EMAP’s business titles for €1.56bn. Olivier Woolf, media sector leader in the corporate finance team at PricewaterhouseCoopers, says might be “a natural buyer” for too.

“The business has been positioned as a private equity play rather than trade,” he says. “Most of these products are mature, so a private equity investor with interests in the area already could come in and take out costs, integrate an online offering, or do both.”

Jonathan Goodwin, global head of media investment banking at Jefferies International, expects keen interest in the group, saying: “All the major private equity players should be interested.” The sale is being run by UBS, and Permira and Charterhouse have been linked with the company too.

However, in the current environment, many admit that it will depend on whether the financial buyers manage to raise sufficient finance. “Constraints on the availability of sterling debt may make the financing tough if it is sold as a whole. It is more likely it will be broken up,” says Goodwin.

Reed Elsevier’s chief executive Sir Crispin Davis has accepted that he might have to wait to get the best price, saying: “We are not going to be rushed into a sale. It is possible that we may have to wait until the trading environment improves.”

The Benelux mid-market remains as active as ever. David Vietor, a banking lawyer at NautaDutilh, says deals of between €150m and €200m are possible but “the leverage available is less and the deals are taking longer to complete”.

Nevertheless, Waterland Private Equity has just closed fundraising for a fourth fund at a healthy €800m. This will be directed at acquiring companies with revenues between €10m and €150m across the Benelux region and Germany that are keen to expand through a buy-and-build strategy. Targeted sectors include leisure and support services, among others.

has remained active on private equity mandates. Managing partner Maarten Wolleswinkel says: “We have been acting for corporates doing buy-and-build transactions but we also sold a broadcasting company to Goldman Sachs for €50m.”

Holland also recently advised on the sale of a stake in text book publisher Iddink to Rabo Capital, which Wolleswinkel says is one of the more active private equity firms in the Netherlands.

“Financing is still available but is being provided by separate banks not syndicates. Deals between €200m and €500m are difficult but can be done,” says Wolleswinkel. He concludes: “The environment was the same for us last year but we can now handle bigger transactions, so personally we expect to be busier.”

Robert Schuman, one of the founders of boutique Nielen Schuman, is reasonably optimistic too, saying: “The number of transactions this year will be lower than in 2007 but not by so much. Private equity will have to refine its approach though.”

Wouter Han, managing director at Lazard’s Amsterdam office, agrees: “In early 2007, private equity was looking at deals of €1bn or more, but because of the lack of financing multiples are down and deal sizes are lower,” he says, “but there are still a lot of mid-market deals being done. Everyone across the market is being forced to look at smaller deal sizes.”