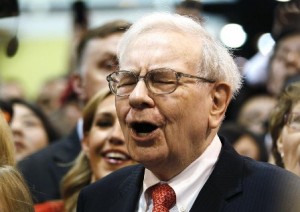 Warren Buffett’s Berkshire is buying 20 million shares at $28 per share, a slight discount to the stock’s Monday closing.

Carlyle held about 170.3 million shares, or a 74.1 percent stake, in Axalta as of Dec. 31, according to a regulatory filing.

Axalta, the Dupont unit which Carlyle bought for $4.9 billion in February 2013, makes liquid and powder coatings for the automotive and transportation industries.

Berkshire bought lubricants maker Lubrizol Corp for about $9 billion in 2011.

Buffett signaled last year that he planned to make more large acquisitions for Berkshire to expand his conglomerate.

“Berkshire is the type of quality investor that Axalta has been fortunate to attract since our IPO last year,” Axalta Chief Executive Charlie Shaver said.

Axalta’s shares, which closed at $28.33 on Monday, have risen 45 percent since their debut on the New York Stock Exchange.

(Reporting by Kanika Sikka in Bengaluru; Editing by Saumyadeb Chakrabarty and Maju Samuel)