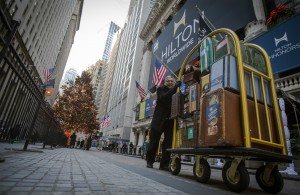 The sale of 90 million shares, jointly marketed by Deutsche Bank, Bank of America Merrill Lynch and Citigroup, was also unusual because it was completed before the market opened on Monday.

Investors were anticipating the trade after the hotel operator’s strong operating results on April 29, said bankers.

On Hilton’s April 29 earnings call, chief executive Chris Nassetta redirected analyst questions about a looming secondary sale to Blackstone, but said the “pattern” of selling the latter that had been established would likely continue.

“These liquidity events are fairly well-telegraphed,” one ECM banker told International Finance Review. “Companies go through blackout periods around earnings. Once [earnings are over] it was an opportunistic window for Blackstone to take down their ownership position.”

The block reduces Blackstone’s Hilton stake to at least 46 percent, from 55.2 percent, and to 44.7 percent if it exercised a 15 percent over-allotment option.

The sale is the third by Blackstone of Hilton since taking the hotel operator public in December 2013, about six years after its $26 billion leveraged buyout. In June and November of last year, Blackstone raised $2.33 billion and $2.59 billion from marketed stock sales that progressively reduced the Hilton stake.

The selldown could clear the way for Hilton’s inclusion in major indices, including the S&P 500 Index, an added attraction for investors.

The sale by Blackstone may suggest Hilton is not involved in serious negotiations with Starwood Hotels & Resorts Worldwide, since Blackstone is unlikely to have been able to have sold Hilton shares if any M&A deal was imminent, bankers speculated.

There had also been speculation recently that a Chinese investor was considering buying part of Blackstone’s Hilton stake, one market source said.

At the earnings call, one analyst asked if a merger with Starwood might be a useful means of diluting Blackstone’s Hilton stake (via a stock-based merger) and cutting debt at the same time.

Nassetta said: “You don’t do big M&A to solve those issues… It’s got to be strategically and economically driven or you’ll screw up a good company.”

The sale today also removes a technical overhang that weighed on the Hilton stock price due to Blackstone’s large ownership position, one reason many analysts see the shares as undervalued relative to peers.

Ahead of the sale, 18 out of 21 equity analysts that cover Hilton had a buy or a strong buy and three had a hold recommendation, Thomson Reuters data shows.