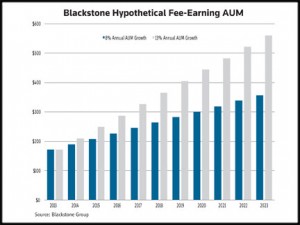 “In the past two years we’ve raised $96 billion from investors — more than the total capital raised by our four closest competitors combined,” Schwarzman said in his opening remarks at the New York firm’s 2013 investor day. Before repeating the $96 billion figure, he said, “I want to give that to you again for people who think we have a growth problem.”

Among the horde of data, projections and new business initiatives presented to its public unit holders at the Waldorf Astoria Hotel, Blackstone kicked off with its overall asset under management performance, which averages 28 percent per year dating back to 1995. Based on the more conservative growth rate of 13 percent going forward, Blackstone projects its current $171 billion fee-earning AUMs could grow to $560 billion in 10 years. Under a more modest 8 percent AUM growth rate, the total would increase to $356 billion over the same period.

Blackstone also played up its historic 2.2x multiple on invested capital and an average 10 percent to 18 percent return on liquid funds.

From the top down, Blackstone executives told investors the firm deserves a higher price-to-earnings multiple on its public units than the current market level of about 9x, lagging the P/E ratio of 16x for the broad class of traditional managers.

“Blackstone its benefiting from remarkable returns, institutional investors simplifying whom they want to deal with and you get the extra boost from more money going into the alternative class all at the same time,” said Schwarzman, who expects strong growth going forward.

“Something has to give with our valuation,” chimed in Blackstone CFO Laurence Tosi.

Schwarzman pitched Blackstone as a “safe pair of hands” in an environment that hasn’t been easy for anyone.

“By applying a strict standard for discipline, a proven investment process and a commitment to excellence, we’ve earned an extraordinary reputation among our limited partners,” he said.  “They’ve trusted us with more and more of their money.”

It also filed an offering on March 13 for Capital Trust, a real estate finance company that specializes in credit-sensitive structured financial products. The firm plans to change its name to Blackstone Mortgage Trust as part of a 1-for-10 reverse stock split, which is scheduled for a closing on May 6.

Blackstone said overall exits in its real estate portfolio will be aided by the low cost of capital for public companies and increased appetite from sovereign wealth funds.

It’s also bullish on the long-term prospects for its push into the U.S. residential market, with 26,000 houses now owned. It disclosed an 85 percent lease rate on homes that are renovated. It is also considering other initial public offerings in the real estate sector.

While acknowledging some headwinds in the fundraising game currently, Joe Baratta, global head of private equity, said efforts around the Blackstone VII fund should begin “in a few years.”

Among its recent flow of deals, Blackstone-backed SeaWorld Entertainment Inc. rose as much as 22 percent in their market debut on April 19, valuing the theme park operator at $3.05 billion, sister news service Reuters reported.

The firm also snapped up Credit Suisse’s private equity unit, which has $9 billion of AUM, but it walked away from a rival bid or taking part in the Dell Inc. acquisition proposed by Silver Lake.