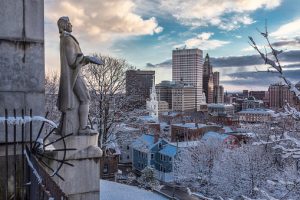 Canada Pension Plan Investment Board, HarbourVest Partners and StepStone Group are leading a process that would enable existing investors in Providence Equity VII to sell their interests in the fund, according to two people with knowledge of the situation.

The buyers are offering a 3 percent premium to net asset value as of a March 31, 2018, reference date, the people said.

The process, known as a tender offer, is in its election period, which ends July 20, the people said. This means existing LPs are deciding whether to sell their stakes in the fund.

Along with allowing existing investors to cash out, Providence also is looking for an injection of fresh capital into its eighth fund as part of the deal, sources told Buyouts in prior interviews.

Providence Equity VIII is in market, targeting $5 billion with a $6 billion cap, Buyouts previously reported. The injection of fresh capital is known as a staple.

In tender offers, a GP lines up a buyer or buyers who set a price to buy LP stakes in a fund, and LPs can choose to sell or not. Tender offers hinge on whether existing LPs choose to sell; if they don’t, the deals often fall apart.

Buyers generally have a minimum amount of selling LPs they want to see make the deal worth their time.

Park Hill Group is adviser on the process, sources said.

Providence closed its seventh fund on $5 billion in 2013. Fund VII, a 2012 vintage, was generating a 23.2 percent internal rate of return and a 1.88x multiple as of March 31, 2018, Oregon Public Employees Retirement Fund information shows.

A spokesman for Providence declined to comment. The firm was formed in 1989 as a sector specialist focused on media, communications, education and information.

Providence Equity raised $12.1 billion in 2007 for its sixth fund at the height of the credit-bubble era. That fund was generating a 6.2 percent IRR and a 1.45x total value to paid-in multiple as of March 31, 2018, the Oregon pension’s data shows.

Providence is one of several high-profile managers using the secondary market to deliver liquidity to investors in older funds.

Last year, Warburg Pincus sold an about $1.2 billion strip of Asian investments from its 11th fund to a group of buyers including Lexington Partners and Goldman Sachs.

This year, TH Lee has been exploring a secondary process for its $8.1 billion Fund VI, which closed in 2007. The status of that process is not clear.

GP-led deals, like tender offers, represented 24 percent of total market volume of around $58 billion last year, according to Greenhill Cogent. This included more than 10 GP-led transactions of more than $500 million, the intermediary said.

“A new class of high quality, brand name GPs has entered the GP-led market to proactively provide liquidity options to their limited partners. The use of secondary market solutions has become increasingly accepted, paving the way for other quality GPs to consider transactions,” Greenhill Cogent said in the report.