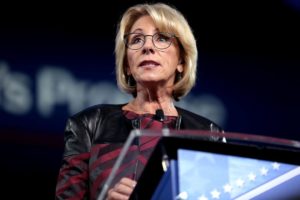 Most private equity secondaries activity is on pause in the downturn, but there’s a massive sale about to hit the market.

The investment firm that helps manage the DeVos family fortune is getting ready to sell up to $1 billion in private equity fund stakes as it looks to take advantage of opportunities created by the downturn, three sources told Buyouts.

Ottawa Avenue Private Capital, which manages assets for RDV Corp, the family office of Richard and Helen DeVos, is working with Evercore to shop the portfolio, sources said. Richard DeVos is father-in-law to US Education Secretary Betsy DeVos.

The portfolio, which hasn’t yet hit the market but will soon, is fairly concentrated in terms of number of firms, sources said. Some of the big relationships in the portfolio include Vista Equity and AEA Investors, sources said.

Market sources speculated the portfolio could get picked off piecemeal, rather than sold in one shot. However, a full portfolio sale would allow for a buyer to use leverage and provide for diversification in the underlying managers and assets, another source said.

Sources questioned the timing of the upcoming sale with the expectation of steep discounts on secondaries sales in general. Much secondaries activity has been stymied by the downturn, with buyers and sellers far apart on pricing. GPs are now publishing performance marks for the first quarter, which depending on sector are seeing steep declines, sources said.

With the Ottawa Avenue portfolio, however, managers are of high quality, and not particularly downturn-impacted, sources said. That could give buyers confidence in the future performance of the funds, sources said.

The market also is flush with capital, with about $110 billion of dry powder for secondaries, sources said. Shopping a portfolio now “will get attention,” one of the sources said, as opposed to later this year when pent-up demand from the downturn explodes into the market.

The Grand Rapids, Michigan, firm was formed in 2015. The Ottawa investment team had historically operated as a business unit within RDV Corp, which was formed in 1991, according to Ottawa Avenue’s Form ADV.

RDV reorganized its investment advisory services into Ottawa Avenue to allow the team to expand its investment mandate beyond RDV to external clients and raise funds, the document said.

Ottawa Avenue is a wholly owned, indirect subsidiary of Wakestream Holdings, which is owned by members of the Richard and Helen DeVos family, according to the firm’s Form ADV.

In a letter to ethics officials at the Department of Education early  in 2017, Betsy DeVos expressed her intention to divest her interests in 102 entities to avoid conflicts of interest.