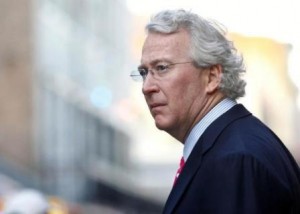 EMG said it has been informed that Chesapeake’s lawsuit against AEP, where McClendon is CEO, and several other entities linked to him will continue. But Chesapeake will drop all claims against AEU and the unnamed investors in exchange for approximately 6,000 acres of oil and gas leases in the northern Harrison County region of the Utica shale play in Ohio, and up to $25 million in cash, EMG said.

McClendon is no longer an officer of American Energy Utica, EMG said.

“Although Mr. McClendon is a director and the single largest non-institutional shareholder in AEU, he did not approve the settlement and neither he nor AELP were advised of the negotiated terms of this settlement,” said American Energy Partners in an emailed statement.

The settlement could raise questions about whether EMG may be reducing its support for McClendon and the new ventures he formed after his resignation from Chesapeake Energy.

EMG has invested more than $3 billion in ventures formed by McClendon since 2013. Some of the funds were used to snap up thousands of acres in the Utica shale play through American Energy-Utica, where EMG is the largest equity holder.

A series of Reuters stories in 2012 examined in part how McClendon had closely entwined his personal finances with those of Chesapeake. Following a liquidity crunch and corporate governance crisis, McClendon departed Chesapeake in April 2013.

In its claim filed in Oklahoma County District Court, Chesapeake alleged that before McClendon left the company, he “misappropriated highly sensitive trade secrets” and used them to recruit investors and buy land leases for a new company he founded in 2013, American Energy Partners.

Chesapeake alleges the information was used by McClendon and American Energy Partners to acquire drilling rights on land in the Utica Shale formation in four separate transactions. AEP and McClendon have denied the allegations.

But the settlement suggests that EMG viewed the claims as sufficiently troublesome to resolve out of court, and separately from McClendon. The full terms of the settlement remain confidential, EMG said.

AEP and McClendon said they will continue a bid to have the legal dispute resolved through arbitration. McClendon has contended that arbitration is required under the terms of his separation agreements with Chesapeake, which also allowed him access to an extensive array of Chesapeake’s oil and gas leasing information.

Chesapeake shares were up 2.2 percent at $15.09 on Tuesday morning.

(Reporting by Brian Grow in Atlanta and Joshua Schneyer in New York; editing by Jeffrey Benkoe and Matthew Lewis)