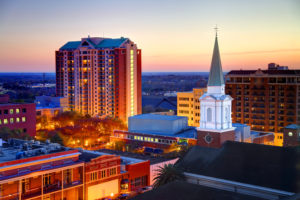 Florida did not indicate it was concerned about the program’s performance. Both Florida staff and Hamilton Lane, which manages most of the in-state program, stressed its wide diversification and Florida focus make benchmarking difficult.

The program’s mandate is to invest up to 1.5 percent of the fund’s assets in “technology and growth enterprises that have significant presence in Florida.”

“Our goal is to generate the best possible returns for Florida SBA in the context of investing exclusively in Florida, secondly, it’s driving liquidity, and third, it’s having Florida impact,” said Hamilton Lane’s Nayef Perry at the pension’s March 30 investment advisory council meeting.

In private equity, the system committed $1 billion to the program overall. Hamilton Lane manages $875 million of that while JP Morgan Asset Management controls the remaining $125 million.

Most recently, the pension committed $125 million to Hamilton Lane in 2019, as Buyouts reported.

The funds are a mix of direct investments made in the state of Florida and commitments to private equity funds managed by firms with strong presences in the state.

The numbers for Fund II’s second tranche were especially good, coming in over 2,600 basis points above its benchmark. Hamilton Lane’s Ankur Dadhania said the tranche broke its J-curve in two to three quarters as opposed to the more common 14 to 18 quarters.

Hamilton Lane said its program created almost 20,000 jobs since inception and put $1.50 in capital expenditures into Florida for every $1.00 of investment from the program.

The remaining $125 million is managed by JP Morgan Asset Management as the Florida Sunshine State Fund. It has also shown promising early returns despite its recent vintage.

While all the tranches of the Hamilton Lane funds beat the firm’s benchmarks, the internal Florida private equity benchmark adds a premium which the overall program has not beaten.

Hamilton Lane measured its returns using the Russell 2000 public markets index. Internally, Florida uses the Russell 2000 plus a premium of 300 basis points to measure all of its private equity holdings, including the in-state investments.

Fund I, excluding the credit investments, returned 11.3 percent since inception against a 9.4 percent benchmark. After the premium is added, that becomes 12.4 percent.

Even with the premium, Fund I and Fund II’s second capital tranches both beat Florida’s internal benchmark, however.

Both Florida and Hamilton Lane played down any performance concerns.

“The Florida Growth Funds’ opportunity set is defined by its Florida focused mission and therefore is somewhat narrower than standard public market benchmarks,” a Florida spokesman said in a statement.

Hamilton Lane said the different capital tranches had very diverse strategies and a Florida focus, which made benchmarking them “complex and challenging.”

“With a holistic review of performance measures and considering the fund objectives and the opportunity set available to the fund, we engage in regular dialogue with the manager about both past performance and opportunities to enhance returns,” the Florida spokesman said.