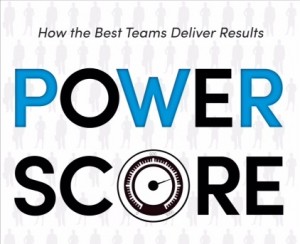 The most important element of a leader’s effectiveness, as measured by his or her “power score,” according to a new book on business leadership, is slotting the right people into the right positions. The three authors refer to this as getting the “who” right, which you can remember from the letter “w” in the word “power.”

The “p” in “power” refers to setting the right priorities, and the “r” stands for building the right relationships.

Ask your team to rate how well you’re doing on each of these three elements on a scale of one to 10. Multiply the three numbers and you have your power score. A score of 729, the equivalent of getting nines on each element, means your team is operating at full power. About 10 percent of teams run at this elevated level at any particular time, according to the book. Another 30 percent have scores between 500 and 700, which the authors describe as “a few tweaks” below full power. “Everybody else,” the authors write, “falls below 500 and runs well short of full power.”

Due to be released June 16 on Amazon.com, “Power Score: Your Formula for Leadership Success,” was written by Geoff Smart, Randy Street and Alan Foster of the consulting firm ghSMART. Smart is the firm’s founder and chairman, Street is managing partner and Foster is a principal. Their firm counts a number of buyout firms as clients, including Berkshire Partners, Centerbridge Partners, Hammond Kennedy Whitney and New Mountain Capital.

The authors say their advice is based on interviews conducted over the last two decades with more than 15,000 leaders, including not just business executives but high school principals, military generals and others.

Getting the right people in the right positions, while the most important ingredient in success, turns out to be the hardest element of the three to achieve. “Fewer than 14 percent of all leaders excel at this,” the authors write. “The leaders who do it well are skilled at hiring, removing nonperformers, and developing their teams, and they invest a lot of time in getting it right.”

Setting priorities is the second most difficult to achieve, with just under a quarter excelling at it. Forming relationships is the one issue leaders have the least trouble achieving. Nearly half, or 47 percent, excel at it.

Indeed, Lincoln shouldn’t have felt too bad about not firing General McClellan sooner: The most common flaw in leaders, according to the authors, is “failing to remove underperformers.” Another common weakness is not hiring “A” players, defined as “those who have at least a 90 percent chance of succeeding in a role where only the top 10 percent of possible people could succeed, at a given compensation level.” The book offers practical steps for achieving a 90 percent hiring success rate, instead of the average, which is just 50 percent:

Scorecard. Before searching for a candidate, create a scorecard that covers the five to seven outcomes the candidate needs to achieve, and the skills and behaviors needed to succeed in the position. After interviewing each candidate, give him or her a rating based on your confidence he or she can achieve the outcome or has the skill. A score of “A” means you are 90 percent confident, “B” means 50 percent, and “C” means less than 25 percent. Those who average an “A” for each outcome and skill are your “A” candidates.

Source. In developing a flow of candidates put most of your emphasis on referrals. More than three-quarters of leaders say that getting referrals “is by far the best route” to finding top people.

Select. Start with a screening interview to ask about career goals, as well as strengths and weaknesses. Follow up with the main interview to probe into the experience and achievements of candidates in relevant jobs that they’ve held. What were they hired to do in a particular job? What were their main accomplishments? What mistakes did they make, and what did they learn? Ask for concrete examples of how they accomplished what they did. Why did they leave their previous jobs? Were they pushed out or pulled into a better position?

Little in “Power Score” will strike the devotee of leadership tomes as particularly new. The chapter on priorities emphasizes staying focused on just a handful of goals that are informed by employee and customer feedback and that are most likely to carry your team toward a clearly defined mission. Similarly, the chapter on relationships reminds you to regularly measure progress against goals, and to make sure team members are communicating enough, and at the right times.

Still, the under-200-page book serves as an example-filled, easy-to-digest guide to what constitutes effective leadership, something that most workaday employees know to be in lamentably short supply. Just 1 percent of leaders excel at all three elements of leadership “on a sustained basis throughout their careers,” according to the book. And that has consequences.

Leaders who run their teams at full power, write the authors, are twice as successful as those who don’t.